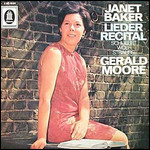 She was particularly closely associated with baroque and early Italian opera and the works of Benjamin Britten. During her career, which spanned the 1950s to the 1980s, she was considered an outstanding singing actress and widely admired for her dramatic intensity, perhaps best represented in her famous portrayal as Dido, the tragic heroine of Berlioz's magnum opus, Les Troyens.[2] As a concert performer, Dame Janet was noted for her interpretations of the music of Gustav Mahler and Edward Elgar. David Gutman, writing in Gramophone, described her performance of Mahler's Kindertotenlieder as "intimate, almost self-communing."[3]

Janet Abbott Baker was born in Hatfield, South Yorkshire, where her father was an engineer as well as a chorister. Members of her family worked at Bentley Pit, in Doncaster, South Yorkshire. She attended York College for Girls and then Wintringham Girls' Grammar School in Grimsby. The death of her elder brother, Peter, when she was 10 years old, from a heart condition, was a formative moment that made her take responsibility for the rest of her life, she revealed in a BBC Radio 3 Lebrecht Interview in September 2011.

In her early years Baker worked in a bank, transferring to London in 1953 where she trained with Meriel St Clair and Helene Isepp, whose son Martin became her regular accompanist. Knocked down by a bus in 1956, she suffered concussion and a persistently painful back injury. That same year, she came second in the Kathleen Ferrier Memorial Competition at the Wigmore Hall, winning national attention.

In 1956, she made her stage debut with Oxford University's Opera Club as Miss Róza in Smetana's The Secret. That year, she also made her debut at Glyndebourne. In 1959, she sang Eduige in the Handel Opera Society's Rodelinda; other Handel roles included Ariodante (1964), of which she later made an outstanding recording with Raymond Leppard, and Orlando (1966), which she sang at the Barber Institute, Birmingham.

With the English Opera Group at Aldeburgh, Baker sang Purcell's Dido and Aeneas in 1962, Polly (in Benjamin Britten's version of The Beggar's Opera) and Lucretia (in Britten's The Rape of Lucretia). At Glyndebourne she appeared again as Dido (1966) and as Diana/Jupiter in Francesco Cavalli's La Calisto, and Penelope in Monteverdi's Il ritorno d'Ulisse in Patria. For Scottish Opera she sang Dorabella in Mozart's Così fan tutte, Dido in Berlioz's The Trojans as well as Dido in Purcell's Dido and Aeneas,[4] Octavian in Richard Strauss's Der Rosenkavalier, the Composer in Ariadne auf Naxos and the role of Orfeo in Gluck's Orfeo ed Euridice. The latter was considered her signature role; she sang it in many productions and a videotaped performance from Glyndebourne is available (see below).

In 1966, Janet Baker made her debut as Hermia in Britten's Midsummer Night's Dream at the Royal Opera House, Covent Garden, and went on to sing Berlioz's Dido, Kate in Britten's Owen Wingrave, Mozart's Vitellia and Idamante, Cressida in William Walton's Troilus and Cressida and the title role in Gluck's Alceste (1981) there. For the English National Opera, she sang the title role in Monteverdi's L'incoronazione di Poppea (1971),[5] Charlotte in Massenet's Werther, and the title roles in Donizetti's Maria Stuarda and Handel's Giulio Cesare.

During this same period she made an equally strong impact on audiences in the concert hall, both in oratorio roles and solo recitals. Among her most notable achievements are her recordings of the Angel in Elgar's The Dream of Gerontius, made with Sir John Barbirolli in December 1964 and Sir Simon Rattle over twenty years later; her 1965 performances of Elgar's Sea Pictures and Mahler's Rückert Lieder, also recorded with Barbirolli; and, also from 1965, the first commercial recording of Ralph Vaughan Williams's Christmas oratorio Hodie under Sir David Willcocks. She performed in 1971 for the Peabody Mason Concert series in Boston.[6]

In 1976 she premiered the solo cantata Phaedra, written for her by Britten; and Dominick Argento's Pulitzer Prize-winning song cycle From the Diary of Virginia Woolf, also written with her voice in mind. She has also been highly praised for her insightful performances of Brahms's Alto Rhapsody, Wagner's Wesendonck Lieder as well as solo songs from the French, German and English repertoire.

Dame Janet Baker's final operatic appearance was as Orfeo in Gluck's Orfeo ed Euridice, on 17 July 1982, at Glyndebourne.[7] She continued to perform lieder recitals for another seven years, retiring for good in 1989. She published a memoir, Full Circle, in 1982. In 1991, Baker was elected Chancellor of the University of York. She held the position until 2004, when she was succeeded by Greg Dyke. An enthusiastic Patron of the Leeds International Pianoforte Competition, she gave an address at the closing ceremony of the 2009 event.[8]

Janet Baker was made a Commander of the Order of the British Empire (CBE) in 1970 and appointed to Dame Commander (DBE) in 1976. She was appointed a member of the Order of the Companions of Honour (CH) in 1993. In 1968, she was initiated as an Honorary Member of Sigma Alpha Iota International Music Fraternity by the Alpha Omicron Chapter at Occidental College, California, United States.[9] She received the Léonie Sonning Music Prize of Denmark in 1979. She is the recipient of both Honorary Membership (1987) and the Gold Medal (1990) of the Royal Philharmonic Society. In 2008, she received the Distinguished Musician Award from the Incorporated Society of Musicians and in 2011 she was installed as an Honorary Freeman of the Worshipful Company of Musicians at a ceremony in the City of London. This is the highest honour the Company can bestow on a fellow musician.

She was voted into Gramophone magazine's inaugural Hall of Fame in 2012.[10]

She married James Keith Shelley in 1957 in Harrow. Following her retirement as a singer she did perform and record some spoken roles, for example the role of the Narrator in Britten's incidental music for The Rescue of Penelope; in later years, apart from occasional public appearances such as the 2009 Leeds event, she now has "nothing to do with anyone except close friends".[7]

This article uses material from the article Janet Baker from the free encyclopedia Wikipedia and it is licensed under the GNU Free Documentation License.

Bruca Manigua Chachaloca
Update Required To play the media you will need to either update your browser to a recent version or update your Flash plugin.