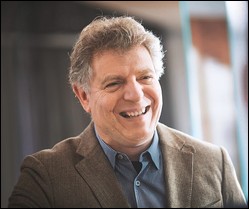 Karl-Heinz Steffens (born 28 November, 1961) is a German clarinetist and conductor. Recently appointed Music Director of Den Norske Opera & Ballett[1] in Oslo, he is recognised as a conductor of great distinction in both operatic and symphonic worlds.

Currently Music Director of the Deutsche Staatsphilharmonie Rheinland-Pfalz in Ludwigshafen,[2] under his leadership the orchestra has been honoured with many accolades such as the ECHO[3] award for Best Orchestra in 2015[3] for their recording of works by Bernd Alois Zimmermann;[4] in 2016/17 they were nominated prizewinners of the Best Concert Programme of the Season by the Deutsche Musikverlegerverband, the German Music Publishers’ Association. Undertaking substantial surveys of repertoire with his orchestra, he is presently engaged in a Bruckner symphony cycle programmed across several seasons.

Steffens is also in great demand as a guest conductor. In recent seasons he has worked with ensembles such as the Bavarian Radio Symphony Orchestra,[5] Berlin Philharmonic,[6] Munich Philharmonic, Philharmonia, Royal Stockholm Philharmonic, Vienna Symphony,[7] and Zurich Tonhalle Orchestras. He has additionally visited the City of Birmingham Symphony, Bournemouth Symphony, and Hallé Orchestras in the UK and the Radio Symphony Orchestras of Berlin, Cologne, Frankfurt, Hamburg, Hannover, Leipzig and Stuttgart. The 2015/16 season saw debuts in Torino and Lisbon as well as with the orchestra of Maggio Musicale in Florence and reinvitations to the Orchestre Philharmonique de Radio France and that of Monte Carlo, while this season he returns to the Berlin Radio Symphony and the Dresden, Helsinki and Netherlands Philharmonic Orchestras. He is a frequent visitor to the Philharmonia in London; over this season and the next, he conducts the cycle of Brahms Symphonies and the Requiem with them.

Equally at home in the opera house, Steffens assumed the musical leadership of the Norwegian National Opera and Ballet at the beginning of the 2016/17 season, during which he conducts productions including Cosi fan tutte, Fidelio, Pelléas et Mélisande and Tosca. He has appeared several times at the Teatro alla Scala leading performances of Cosi fan tutte, Don Giovanni, and Götterdämmerung and is invited regularly to the Berlin Staatsoper Unter den Linden, most recently in 2015/16 with Ariadne auf Naxos,[8] as well as making his Zurich Opera debut last season with Cosi fan tutte.[9]

Prior to his conducting career, Steffens was a highly respected solo clarinettist who also held several orchestral positions culminating in the successive posts of Principal Clarinet with the Bavarian Radio and the Berlin Philharmonic Orchestras.

This article uses material from the article Karl-Heinz Steffens from the free encyclopedia Wikipedia and it is licensed under the GNU Free Documentation License.