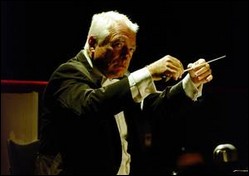 Leopold Hager (born 6 October 1935, Salzburg)[1] is an Austrian conductor known for his interpretations of works by the Viennese Classics (Haydn, Mozart, Beethoven and Schubert).

Hager studied piano, organ, harpsichord, conducting, and composition at the Salzburg Mozarteum (1949–1957) with Bernhard Paumgartner, Gerhard Wimberger, Cesar Bresgen, J.N. David, and Egon Kornauth. He was appointed assistant conductor at the Stadttheater Mainz (1957–1962) and, after conducting the Linz Landestheater (1962–1964), he was appointed first conductor of the Cologne Opera (1964–1965). He then served as Generalmusikdirektor in Freiburg im Breisgau (1965–1969), chief conductor of the Mozarteum Orchestra and of the Landestheater in Salzburg (1969–1981). In October 1976 he debuted at the Metropolitan Opera in New York, conducting Le nozze di Figaro. He also appeared as a guest conductor with other opera houses as well as orchestras in Europe (Berlin Philharmonic, Vienna Philharmonic) and the United States. In 1981, he became music director of the Orchestre Symphonique de Radio-Télé-Luxembourg (now the Luxembourg Philharmonic Orchestra), and concluded his tenure there in 1996.[2][3][4]

This article uses material from the article Leopold Hager from the free encyclopedia Wikipedia and it is licensed under the GNU Free Documentation License.