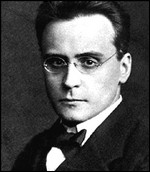 From Wikipedia, the free encyclopedia.
Anton Webern (3 December 1883 15 September 1945) was an Austrian composer and conductor. He was a member of the Second Viennese School. As a student and significant follower of Arnold Schoenberg, he became one of the best-known exponents of the twelve-tone technique; in addition, his innovations regarding schematic organization of pitch, rhythm and dynamics were formative in the musical technique later known as total serialism.

Webern was born in Vienna, Austria, as Anton Friedrich Wilhelm von Webern. He was the only surviving son of Carl von Webern, a civil servant, and Amelie (née Geer) who was a competent pianist and accomplished singer the only obvious source of the future composer's talent.[1] He never used his middle names and dropped the von in 1918 as directed by the Austrian government's reforms after World War I. After spending much of his youth in Graz and Klagenfurt, Webern attended Vienna University from 1902. There he studied musicology with Guido Adler, writing his thesis on the Choralis Constantinus of Heinrich Isaac. This interest in early music would greatly influence his compositional technique in later years by employing palindromic form on both the micro- and macro-scale and the economical use of musical materials.

He studied composition under Arnold Schoenberg, writing his Passacaglia, Op. 1 as his graduation piece in 1908. He met Alban Berg, who was also a pupil of Schoenberg's, and these two relationships would be the most important in his life in shaping his own musical direction. After graduating, he took a series of conducting posts at theatres in Ischl, Teplitz, Danzig, Stettin, and Prague before moving back to Vienna. There he helped run Schoenberg's Society for Private Musical Performances from 1918 through 1922 and conducted the "Vienna Workers Symphony Orchestra" from 1922 to 1934.

Webern's music was denounced as "cultural Bolshevism" and "degenerate art" by the Nazi Party in Germany, even before the Austrian Anschluss of 1938.[2] Although Webern had sharply attacked Nazi cultural policies in private lectures given in 1933, their intended publication did not take place at that time, which proved fortunate since this later "would have exposed Webern to serious consequences."[3] As a result of official disapproval, he found it harder (though at no stage impossible) to earn a living, and had to take on work as an editor and proofreader for his publishers, Universal Edition.

It was thanks to the Swiss philanthropist Werner Reinhart that Webern was able to attend the festive premiere of his Variations for Orchestra, Op. 30 in Winterthur, Switzerland in 1943. Reinhart invested all the financial and diplomatic means at his disposal to enable Webern to travel to Switzerland. In return for this support, Webern dedicated the work to him.[4]

He left Vienna near the end of the war, and moved to Mittersill in Salzburg, believing he would be safer there. On 15 September 1945, during the Allied occupation of Austria, he was shot and killed by an American Army soldier following the arrest of his son-in-law for black market activities, when, despite the curfew in effect, he stepped outside the house to enjoy a cigar so as not to disturb his sleeping grandchildren. The soldier responsible, army cook Pfc. Raymond Norwood Bell, was overcome by remorse and died of alcoholism in 1955.[5]

Webern was survived by his wife, Wilhelmine Mörtl, and their three daughters. His only son, Peter, died on 14 February 1945 of wounds suffered in a strafing attack on a military train two days earlier.[6]

Webern was not a prolific composer; just thirty-one of his compositions were published in his lifetime, and when Pierre Boulez oversaw a project to record all of his compositions, including those without opus numbers, the results fit on just six CDs.[7] However, his influence on later composers, and on post-WWII avant garde music developments in Europe and America were immense, particularly in Paris under the influence of the Webern disciple, Rene Leibowitz and at Darmstadt; and concurrently, in New York City under the influences of another Webern disciple, the composer, Stefan Wolpe and the French composer-conductor, Jacques-Louis Monod. His mature works, using Arnold Schoenberg's twelve-tone technique, have a textural clarity and emotional coolness which greatly influenced composers at Darmstadt, such as Pierre Boulez, Luigi Nono, and Karlheinz Stockhausen.

Like almost every composer who had a career of any length, Webern's music changed over time. However, it is typified by very spartan textures, in which every note can be clearly heard; carefully chosen timbres, often resulting in very detailed instructions to the performers and use of extended instrumental techniques (flutter tonguing, col legno, and so on); wide-ranging melodic lines, often with leaps greater than an octave; and brevity: the Six Bagatelles for string quartet (1913), for instance, last about three minutes in total.

Webern's earliest works are in a late Romantic style. They were neither published nor performed in his lifetime, though they are sometimes performed today. They include the orchestral tone poem Im Sommerwind (1904) and the Langsamer Satz (1905) for string quartet.

Webern's first piece after completing his studies with Schoenberg was the Passacaglia for orchestra (1908). Harmonically, it is a step forward into a more advanced language, and the orchestration is somewhat more distinctive than his earlier orchestral work. However, it bears little relation to the fully mature works he is best known for today. One element that is typical is the form itself: the passacaglia is a form which dates back to the 17th century, and a distinguishing feature of Webern's later work was to be the use of traditional compositional techniques (especially canons) and forms (the Symphony, the Concerto, the String Trio and String Quartet, and the piano and orchestral Variations) in a modern harmonic and melodic language.

For a number of years, Webern wrote pieces which were freely atonal, much in the style of Schoenberg's early atonal works. With the Drei Geistliche Volkslieder (1925) he used Schoenberg's twelve tone technique for the first time, and all his subsequent works used this technique. The String Trio (1927) was both the first purely instrumental work using the twelve tone technique (the other pieces were songs) and the first cast in a traditional musical form.

Webern's tone rows are often arranged to take advantage of internal symmetries; for example, a twelve-tone row may be divisible into four groups of three pitches which are variations, such as inversions and retrogrades, of each other, thus creating invariance. This gives Webern's work considerable motivic unity, although this is often obscured by the fragmentation of the melodic lines. This fragmentation occurs through octave displacement (using intervals greater than an octave) and by moving the line rapidly from instrument to instrument in a technique referred to as Klangfarbenmelodie.

Webern's last pieces seem to indicate another development in style. The two late Cantatas, for example, use larger ensembles than earlier pieces, last longer (No. 1 around nine minutes; No. 2 around sixteen), and are texturally somewhat denser.

The works with opus numbers are the ones that Webern saw fit to have published in his own lifetime, plus a few late works published after his death. They constitute the main body of his work, although several pieces of juvenilia and a few mature pieces that do not have opus numbers are occasionally performed today.

Wikiquote has a collection of quotations related to: Anton Webern

This article uses material from the article Anton Webern from the free encyclopedia Wikipedia and it is licensed under the GNU Free Documentation License.