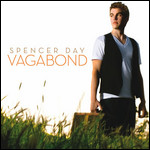 Spencer Day was born on December 30, 1981, in a small town in Utah. Following his parents' separation, he lived with his grandparents in Arizona. After working in a gas station, he moved to California.

Mostly self-taught, Day sang and played piano at bars and retirement homes, typically playing jazz standards. This side of Day is most exhibited in his debut album Introducing Spencer Day (2004). His second album Movie of Your Life (2005) featured his own songs and the title track won San Francisco Academy of Art University's 2005 competition for best original song. Dolby Laboratories chose the video version of the song for use in its global launch of the Dolby 7.1 system.[2]

In the same year, he collaborated with improvisation actor Rafe Chase on a 20-song musical revue, Someday, Love, which premiered at San Franciscos New Conservatory Theatre Center. In addition to writing the score, Day also starred in the show.[3]

Whereas his first two albums were largely self-distributed, Spencer Day's third album, Vagabond (2009), was produced by Concord Jazz. The album peaked at 11 on Billboard's Jazz Album Charts and stayed in the charts for 47 weeks. The single "Til You Come to Me" peaked at number 3 on its Jazz Charts on May 1, 2010.[4][5] The Smooth Jazz Top 20 Countdown ranked "Til You Come to Me" the number one cut for 2010, the first time a vocalist earned that honor.[6]

The song was broadcast often on easy listening stations such as New York City's 106.7 Lite FM (WLTW). His Vagabond tour took him from coast to coast with a few performances in England and Japan.[7] The song "Joe" on the album is semi-autobiographical and reflects his growing up.

Responding to an interviewer's request to describe his musical influences and styles, he said: "Chet Baker meets Paul Simon. Fusing the Great American Songbook with a contemporary pop aesthetic, the more confessional singer-songwriter world with the classic jazz idiom."[2]

In March 2008, Day opened for Rufus Wainwright at the Napa Valley Opera House.[8] He appeared at the Tanglewood Jazz Festival in the summer of 2008.[9]

Of Day's Tanglewood performance of Mel Tormé's "Born to be Blue" with Marian McPartland on piano, NPR's David Lyon said he "can croon with the best of them."[10] The Village Voice described Day in 2010 as "a prodigious singing/songwriting and piano-plunking talent."[11] The Mercury News said "Day uses intuition and improvisation as his primary tools to craft a sound that is traditional and familiar, yet fresh and innovative at the same time, creating a blend too subtle to parse into neatly defined categories," and described him as "a balladeer for the new century."[12]

in a March 2010 interview, Day discussed how he came out as gay to his family and how Rufus Wainwright and k.d. lang have helped to minimize the impact of his coming out on his career and avoid having his music labeled with his sexuality: "What I do, the causes I'm behind, that's what's important. Who I am, unless it is particularly relevant, has no place in my music."[13] In May 2010, Day discussed his homosexuality and said: "I wanted to stand and be counted....I was born in Utah and I grew up Mormon and I want to be part of building a bridge between the LGBT community and the Mormon community."[7][14]

On June 30, 2010, Day rang NASDAQ's closing bell in recognition of his donation of earnings from downloads of his single "Better Way" to Feeding America.[19]

This article uses material from the article Spencer Day from the free encyclopedia Wikipedia and it is licensed under the GNU Free Documentation License.