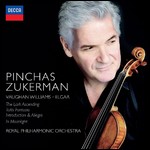 Born in Tel Aviv, to Yehuda and Miriam Lieberman Zukerman, Zukerman began his musical studies at age four, on the recorder. His father then taught him to play the clarinet and then the violin at age eight. Isaac Stern and Pablo Casals learned of Zukerman's violin talent during a 1962 visit to Israel. Zukerman subsequently moved to the United States that year for study at the Juilliard School,[1] under the tutelage of Stern and Ivan Galamian. He made his New York debut in 1963. In 1967, he shared the Leventritt Prize with the Korean violinist Kyung-wha Chung. His 1969 debut recordings of the concerti by Tchaikovsky (under the direction of Antal Dorati, with the London Symphony Orchestra) and Mendelssohn (with Leonard Bernstein and the New York Philharmonic) launched a successful recording career that continues to the present day and boasts over 110 releases.

Zukerman launched his conducting career in 1970 with the English Chamber Orchestra, and served as director of London's South Bank Festival from 1971 to 1974. In the USA, Zukerman was music director of the Saint Paul Chamber Orchestra from 1980 to 1987. He later directed the summer festivals of the Dallas Symphony Orchestra (1991–1995) and the Baltimore Symphony Orchestra (1996–1999). In 1999,[2] he became Music Director of Canada's National Arts Centre Orchestra (NACO) in Ottawa, stepping down from the post in 2015. He has served as Principal Guest Conductor of the Royal Philharmonic Orchestra since 2009.

Zukerman is on the faculty at the Manhattan School of Music and is the head and founder of the Zukerman Performance Program at the school. His former students have included Koh Gabriel Kameda, Julian Rachlin, and Guy Braunstein. In 1999 he founded the National Arts Centre Young Artists Programme, which counts young musicians such as Viviane Hagner, Jessica Linnebach, and Antal Szalai as alumni. In 2006 Zukerman began his involvement in the Rolex Artistic Mentorship programme.

Zukerman plays the "Dushkin" Guarnerius del Gesù violin of 1742. His honours include the King Solomon Award, the National Medal of Arts (presented by President Reagan in 1983), the Isaac Stern Award for Artistic Excellence, and an honorary doctorate from Brown University.

Zukerman and his wife Amanda Forsyth primarily reside in New York City. The pair frequently appear as soloists together.

His recordings have received 21 Grammy nominations, and two Grammy wins. He has collaborated with filmmaker Christopher Nupen on several projects, and was the subject of Nupen's "Pinchas Zukerman: Here to Make Music" documentary of 1974. In 2003 he founded a string quintet, the Zukerman Chamber Players, which has released three CD recordings in addition to its roster of live performances.

This article uses material from the article Pinchas Zukerman from the free encyclopedia Wikipedia and it is licensed under the GNU Free Documentation License.