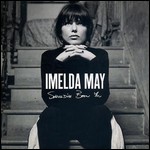 Imelda Mary Higham (born Imelda Mary Clabby; 10 July 1974), professionally known as Imelda May, is an Irish singer, songwriter, multi-instrumentalist. Born and raised in The Liberties area of Dublin, May began her career in music at 16 by performing with a number of local bands and musicians. She formed her own band in 2002, and released her debut studio album, No Turning Back. After the release, May relocated to London with her then-husband, guitarist Darrel Higham. Following an appearance on the BBC music programme Later... with Jools Holland in 2008, she released her second studio album, Love Tattoo (2009). Her fifth studio album, Life. Love. Flesh. Blood was released worldwide on April 21st 2017.

She collaborated and toured with a number of artists following its release. Her third studio album, Mayhem, was released in 2010 and earned her a nomination for the Choice Music Prize. Although known primarily as a singer, she also plays the bodhrán, guitar, bass guitar and tambourine. Described as "a unique vocal talent," May is known for her musical style of rockabilly revival and has also been compared to female jazz musicians such as Billie Holiday.[1][2] She won the Best Female Artist of the Year award at the 2009 Meteor Awards.[3]

May was born in Dublin on 10 July 1974 in the Liberties in the south inner city.[4] She is the youngest of five siblings, with sisters Edel Foy and Maria O'Reilly, and brothers Brendan Clabby and Fintan Clabby. In 1991, she attended Senior College Ballyfermot, where she studied Art, Graphics and Printmaking. Her early musical influences were folk and rock and roll, especially the music of Buddy Holly, Eddie Cochran and Gene Vincent. By the age of nine, she was a fan of Rockabilly and Blues, particularly Elmore James and Billie Holiday.

At fourteen, she sang in an advertisement for Findus Fish Fingers; of which she told Graham Norton on his talk show that she and her friends as a result "got known as the Fish Finger Girls." However, her career began at age 16 when she began touring the Dublin club circuit and she was occasionally barred from her own shows at Dublin's Bruxelles club for being underage. "I was getting tips from the best musicians in Dublin," May said. "One of them said, 'your voice is great, but it needs to roughen.'" It was around this time, when driving a tearful Imelda to a gig after a boyfriend break-up, that her father asked her, "Is your heart broken? Excellent. Now you can sing the blues."[5] After moving to the UK in 1998, May began singing with Mike Sanchez.[6]

“Some people think the only way of doing well or of having a career in music is to go the X Factor route, but a lot of people lose the joy out of music by going that way, possibly because they're so incredibly focused on other people's ideas of success.”
Imelda May in 2009, selected as a quote of that year by The Irish Times.[7]

May began her professional career in 2003, forming her band and releasing No Turning Back (Foot Tapping Records) under her maiden name, Imelda Clabby. Specialising in rockabilly music, the album was later re-recorded and re-issued by Foot Tapping Records under her married name in 2005. In 2007 she signed a recording contract with Ambassador Records (a subsidiary of Foot Tapping Records), and recorded her second album. Love Tattoo reached No. 1 in Ireland and received wide critical acclaim. It caught the attention of Jools Holland,[8] whom she later supported on tour, which led him to request that she appear on his well-known music show Later... with Jools Holland. She was well received in the United Kingdom, performing to an audience that included Jeff Beck, Elbow, and Roots Manuva.

Her first two singles, "Johnny Got a Boom Boom" and "Big Bad Handsome Man", were released on 23 January 2009. She performed on Ireland's best known chat show, The Late Late Show. She won Female Artist of the Year at the 2009 Meteor Awards. May has also toured the United States including, most recently, a tour with Jamie Cullum. On 14 August 2009 she appeared on RTÉ's Other Voices singing "Johnny Got a Boom Boom" and an unplugged version of "Big Bad Handsome Man".

On 31 January 2010 she performed at the 52nd Grammy Awards with Jeff Beck in tribute to Les Paul.[9] After some promotional performances at festivals, such as the Eurosonic Festival in Groningen, Netherlands,[10] she released her third studio album, Mayhem, in Ireland on 3 September 2010 — again reaching No. 1 in the Irish Album Charts — and in the United Kingdom on 4 October 2010.[11][12]

On 18 July 2011 May made her network television debut on The Tonight Show with Jay Leno, performing "Mayhem", to promote the album's recent release in the U.S.; she appeared on Conan on 8 August and on The Late Late Show with Craig Ferguson later that month.

May contributed a cover of Buddy Holly's "I'm Looking for Someone to Love" for the tribute album, Listen to Me: Buddy Holly, released on 6 September 2011. In 2016 May performed It's Not Easy Bein' Green at RTÉ's Centenary Concert to mark the one hundredth anniversary of the 1916 Rising.

May's fifth album, Life Love Flesh Blood was released on 7 April 2017. She collaborated with American musician T Bone Burnett on the record, who was the sole producer on the album. Throughout the creative process, May received guidance from U2 vocalist Bono. The album followed May's divorce from guitarist Darrel Higham, which influenced many of the lyrical themes featured on the record. Life Love Flesh Blood features soft rock and acoustic styles, which differed significantly from her previous rockabilly genre.[13][14]

May performed the Irish national anthem on August 26th, 2017 at the T-Mobile Arena in Las Vegas, Nevada, before the Floyd Mayweather/Conor McGregor fight.

Performances with other artists

She has worked with producers Mike Crossey, Tony Visconti, Peter Asher and most recently the multi-Grammy Award Winner T Bone Burnett. In 2009 she recorded the official Children in Need single at Abbey Road Studios, alongside Cara Dillon, Terry Wogan, Hayley Westenra and others. In 2010 she participated on the Emotion & Commotion album by Jeff Beck, singing on the track "Lilac Wine" and also on the Japanese CD bonus track "Poor Boy". On 11 November 2010 she appeared as a guest on BBC2's comedy panel music show Never Mind the Buzzcocks.

In 2010 she performed with Meat Loaf as part of the UK leg of his Hang Cool Tour. That same year she and her band, along with Jeff Beck and several other notables, were honoring Les Paul at the Iridium Jazz Club in New York City, where the session was recorded. During 2011 she and her band toured with Jeff Beck. On 16 December 2011 she played to a capacity crowd of 12,000 in the O2 Dublin, with Bono making a surprise appearance as her guest. On New Year's Eve 2011 and New Year's Eve 2016, she appeared on Jools Holland's Hootenanny on BBC Two television in the UK. On New Year's Eve 2012, May performed at a New Year's Eve Concert in College Green, alongside Bell X1 and The Coronas. She performed "Johnny Got a Boom Boom", "Mayhem" and many more. She also announced to Miriam O'Callaghan that same night that, after she was finished touring, she would go back into the studio in March and hopefully have an album out by the end of the year. On 7 September 2014 she performed "Get Ready" as a duet with Smokey Robinson on the launch show of the 2014 series of Strictly Come Dancing on BBC1.

On 4 July 2015 May performed in Marlay Park, Dublin as a special guest at Paolo Nutini's concert, singing with him on a duet of Ben E. King's "Stand by Me". That year she appeared on the Tom Jones album Long Lost Suitcase, performing a duet with him on "Honey, Honey". May was the surprise guest in Dublin for U2's homecoming show on the band's 2015 Innocence + Experience tour: Bono called her 'the other queen of Ireland' as she came on stage to perform 'Desire', streamed live online to millions of viewers.

May and Higham announced their split on 17 July 2015, and Higham also decided to leave the band to focus on his solo career.

This article uses material from the article Imelda May from the free encyclopedia Wikipedia and it is licensed under the GNU Free Documentation License.

Ballad From Upper Neighbors Suite Jimmy "Little Bird" Heath
Update Required To play the media you will need to either update your browser to a recent version or update your Flash plugin.