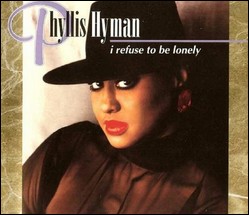 Phyllis Hyman was born in Philadelphia, Pennsylvania, and grew up in the St. Clair Village, the South Hills section of Pittsburgh. Born to an African American family, she was the eldest of seven children and a third cousin of actor Earle Hyman (best known for his recurring role on The Cosby Show as Cliff's father, Russell Huxtable). After leaving Pittsburgh, her music training started at a music school. On graduation, she performed on a national tour with the group New Direction in 1971. After the group disbanded, she joined All the People and worked with another local group, The Hondo Beat. At this time, she appeared in the film Lenny (1974). She also did a two-year stint leading a band called Phyllis Hyman and the P/H Factor. Hyman was discovered in 1975 by internationally known pop artist and music industry veteran Sid Maurer, and former Epic Records promoter Fred Frank, and signed to their Roadshow Records/Desert Moon imprint.

Hyman moved to New York City to work on her career. She did background vocals on Jon Lucien's Premonition and worked in clubs. In 1975 when Norman Connors was laying tracks for "You are My Starship" (1976) he could not get permission to use Jean Carne for the album and had heard about Phyllis Hyman, who was working at a club on the upper Westside of Manhattan. One night after a Jon Lucien concert at Carnegie Hall he went to see Phyllis perform and offered her a spot as the female vocalist on his fourth album for Buddah Records. Once the title song got airplay on Jazz radio, "Starship" went gold, catapulting Phyllis's career along with Norman Connors and Michael Henderson to new heights. R&B radio jumped on board and Norman and Phyllis scored on the R&B charts with a remake of The Stylistics' "Betcha by Golly Wow!".

Hyman sang with Pharoah Sanders and the Fatback Band while working on her first solo album, Phyllis Hyman, released in 1977 on the Buddah Records label. When Arista Records bought Buddha, she was transferred to that label. Her first album for Arista, Somewhere in My Lifetime, was released in 1978; the title track was produced by then-labelmate Barry Manilow. Her follow-up album, You Know How to Love Me, made the R&B Top 20 and also performed well on the clubdance charts. In the late 1970s, Hyman married her manager Larry Alexander (who is the brother of Jamaican pianist and melodica player Monty Alexander), but both the personal and professional associations ended in divorce. Around this time, Hyman began using cocaine, which led to a lifelong dependency.

Hyman's first solo Top Ten hit came in 1981 with "Can't We Fall In Love Again", a duet with Michael Henderson. The song was recorded while she was performing in the Broadway musical Sophisticated Ladies, a tribute to Duke Ellington. She performed in the role for almost two years, receiving a Tony Award nomination for Best Supporting Actress in a Musical and winning a Theatre World Award for Best Newcomer.

Problems between Hyman and her label, Arista, caused a pause in her recording career. She used the time to appear on movie soundtracks, television commercials and guest vocals, working with Chuck Mangione, The Whispers and The Four Tops. Hyman provided vocals for three tracks on jazz pianist McCoy Tyner's Looking Out (1982). She toured often and did a college lecture tour.

In 1983, Hyman recorded the song "Never Say Never Again" as the title song for the James Bond movie of the same name, written by Stephen Forsyth and Jim Ryan. However, Warner Brothers informed Forsyth that Michel Legrand, who wrote the score for the film, had threatened to sue them, claiming he contractually had the rights to the title song. An alternate title song composed by Legrand was eventually used for the film and performed by singer Lani Hall, formerly of Sérgio Mendes and Brasil '66.

Free from Arista in 1985, she released the album, Living All Alone on Kenny Gamble and Leon Huff's Philadelphia International label the following year, capitalizing on the torch songs, "Old Friend" and the melancholy title track, as well as "You Just Don't Know" and "Screaming at the Moon". In 1987, Phyllis Hyman recorded "Black and Blue" as a duet with Barry Manilow on his 1987 Swing Street Arista album. Manilow was a long time admirer of Phyllis and her work. Shortly afterwards, she appeared in the films School Daze and The Kill Reflex. She would also continue to lend her voice to albums for other artists and musicians like Grover Washington, Jr. and Lonnie Liston Smith, while at the same time doing international tours.

Her next album, again on Philadelphia International, called Prime of My Life, released in 1991, was the biggest of her career. It included her first number one R&B hit as well as her first Billboard Top 100 hit, "Don't Wanna Change the World". The album provided two more top 10 R&B singles in "Living in Confusion" and "When You Get Right Down to It", and the less successful "I Found Love". Just over a year later, she appeared one last time on a Norman Connors album, singing the title song, "Remember Who You Are", which became a minor R&B hit. Prime of My Life has sold 454,000 copies to date. The album and debut single were both RIAA certified Gold in 1992.

Hyman's last album, I Refuse to Be Lonely, was a journey into her personal life. Both the title track and the single "I'm Truly Yours" became minor R&B hits.

On the afternoon of June 30, 1995, Hyman committed suicide by overdosing on pentobarbital and secobarbital in the bedroom of her New York City apartment at 211 West 56th Street. She was found unconscious at 2pm, hours before she was scheduled to perform at the Apollo Theater and died three hours later at St. Luke's-Roosevelt Hospital.[1] Her suicide note read in part:

She was 45 years old. A memorial service was held at St. Peter's Lutheran Church in Manhattan. The following week would have been her 46th birthday.[3]

In November 1995, Hyman's posthumous album I Refuse to Be Lonely, was released. Although the project had an overdrawn gestation, to combat the delay in its commercial release, Hyman started performing the tracks, "This Too Shall Pass" and "I Refuse To Be Lonely" in concert. The delay in the album's release adversely affected Hyman both emotionally & financially and the delay was said to be cited over "cost negotiations".

Three years after her death, a second posthumous album of previously unreleased material was released. Songs were culled from various recording sessions from the mid-1980s into the early 1990s. Forever With You (1998) contains love songs, torch songs, bittersweet ballads, smooth jazz offerings and uptempo tracks, most of which showcase Hyman's' usual interpretation of heartbreak and strife. Hyman was quoted as saying that these songs were about "relationships gone bad!"[4] Much of the material on this album was initially intended for her Living All Alone release. The song "Funny How Love Goes" contains a posthumous "duet" featuring vocalist Damon Williams. Half of Hyman's vocals were re-recorded with both singers alternating vocals and providing Williams with exposure.

A UK label Expansion released a jazz-soul orientated compilation in 2003 called In Between The Heartaches that featured cuts from her collaborations with Norman Connors, McCoy Tyner, Jon Lucien and Pharoah Sanders. It also included five unreleased tracks from her period with Arista records.

In September 2007, an authorized biography was released. The book entitled Strength of a Woman: the Phyllis Hyman Story, is written by Jason A. Michael in cooperation with the Estate of Phyllis Hyman. The book mentions Hyman's relationships with both men and one woman.[5]

In 2008, an original version of the James Bond theme "Never Say Never Again", which wasn't used in the film due to contractual issues, was released by the track's co-writer Stephen Forsythe. Stephen Forsythe has been quoted as stating:

During the filming of the James Bond movie Never Say Never Again, I co-wrote the title song for the movie with Jim Ryan. Warner Brothers informed our attorney that the song was to be used as the title song in the picture. However, shortly before its release, Warner Bros informed us that the song could not be used because Michel Legrand, who wrote the score, threatened to sue them, claiming that contractually he had the right to the title song. So my song was never released. The legendary Phyllis Hyman was my first choice to sing the song and working with her is one of the highlights of my musical career. I personally auditioned and sang the song to her while she was having breakfast in her managers office. After agreeing to sing the song, she arrived at the studio and, without any rehearsal and only having heard the song sung once at the breakfast audition, sang the song in one perfect take. Phyllis sadly took her own life in the [mid] nineties. The year before she died, she called me late one night and told me she felt that "Never Say Never Again" was her best and favorite recording.[6]

This article uses material from the article Phyllis Hyman from the free encyclopedia Wikipedia and it is licensed under the GNU Free Documentation License.