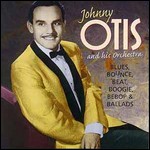 Johnny Otis[1] (born Ioannis Alexandres Veliotes; December 28, 1921 – January 17, 2012) was an American singer, musician, composer, arranger, bandleader, talent scout, disc jockey, record producer, television show host, artist, author, journalist, minister, and impresario.[2] He was a seminal influence on American R&B and rock and roll. He discovered numerous artists early in their careers who went on to become highly successful in their own right, including Little Esther Phillips, Etta James, Big Mama Thornton, Johnny Ace, Jackie Wilson, Little Willie John, Hank Ballard, and The Robins (who eventually changed their name to The Coasters), among many others. Otis has become widely synonymous with being known as the original "King of Rock and Roll"[1] and the "Godfather of Rhythm and Blues".[3]

Otis was born in Vallejo, California, to Greek immigrant parents, Alexander J. Veliotes, a Mare Island longshoreman and grocery store owner, and his wife, the former Irene Kiskakes, a painter.[1][4] He had a younger sister, Dorothy, and a younger brother, Nicholas A. Veliotes, who became the U.S. Ambassador to Jordan (1978–1981) and Egypt (1984–1986). Johnny grew up in a predominantly black neighborhood in Berkeley, California, where his father owned a neighborhood grocery store. He became known for his choice to live his professional and personal life as a member of the African-American community.[5][6][7] He wrote, "As a kid I decided that if our society dictated that one had to be black or white, I would be black."[8]

At 20, despite the deep and enduring objections of his mother, he married Phyllis Walker, a woman of African American and Filipino descent who he had known since childhood.[9] They had four children: Shuggie Otis and Nicholas Otis, both of whom became musicians, and two daughters, Janice and Laura.[10]

Otis began playing drums as a teenager, having bought a set by forging his father's signature on a credit slip. Soon after, he dropped out of Berkeley High School, in his junior year. He joined a local band, the West Oakland House Rockers,[11] with his pianist friend "Count" Otis Matthews. By 1939, they were performing at many local functions, mostly in and around Oakland and Berkeley, and were popular among their peers.

In the early 1940s Otis played in swing orchestras, including Lloyd Hunter's Serenaders[12] and Harlan Leonard's Rockets.[13] He founded his own band in 1945; they had one of the most enduring hits of the big-band era, "Harlem Nocturne", a composition by Earle Hagen. His band included Wynonie Harris, Charles Brown, and Illinois Jacquet, among others. In 1947, he and Bardu Ali opened the Barrelhouse Club in the Watts district of Los Angeles. Otis reduced the size of his band and hired the singers Mel Walker, Little Esther (born Esther Mae Jones and later known as Esther Phillips) and the Robins (who later became the Coasters).[14] He discovered the teenaged Esther Jones when she won a talent show at the Barrelhouse Club. With this band, he toured extensively in the United States as the California Rhythm and Blues Caravan and had a string of rhythm-and-blues hits through 1950.

Otis discovered the tenor saxophonist Big Jay McNeely, who played on his up-tempo "Barrelhouse Stomp". He began recording Little Esther and Mel Walker for Savoy Records, based in Newark, New Jersey, in 1949,[13] and also released a stream of hit records, including "Double Crossing Blues", "Mistrustin' Blues" and "Cupid's Boogie", all of which reached number 1 on the Billboard R&B chart. In 1950, Billboard selected Otis as the R&B Artist of the Year.[15] He also began playing the vibraphone on many of his recordings.[13]

In 1951, Otis released "Mambo Boogie", featuring congas, maracas, claves, and mambo saxophone guajeos in a blues progression, the first R&B mambo ever recorded.[16] Otis moved to Mercury Records in 1951. He discovered the singer Etta James, who was then 13 years old, at one of his talent shows. He produced and co-wrote her first hit, "The Wallflower (Roll With Me, Henry)".

In 1952, while in Houston, Texas, Otis auditioned the singer Willie Mae "Big Mama" Thornton. He produced, co-wrote, and played drums on her 1953 recording of "Hound Dog" (the first recording of the song); he and his band also provided the backup "howling" vocals.[17] The song was co-written by Jerry Leiber and Mike Stoller. Otis had a legal dispute with the songwriting duo over the credits after he learned that Leiber and Stoller had revised the contractual agreement before the singer Elvis Presley recorded a new version of the song, which quickly became a number 1 hit. Claiming Leiber and Stoller illegally had the original contract nullified and rewrote a new one stating that the two boys (who were both 17) were the only composers of the song, Otis sued. The judge decided the case in favor of the defendants, ruling that the first contract with Otis was null and void because they were minors when they signed it.

One of Otis's most famous compositions is the ballad "Every Beat of My Heart", first recorded by the Royals in 1952 for Federal Records.[18][19]It was a hit for Gladys Knight and the Pips in 1961. Otis also produced and played the vibraphone on "Pledging My Love", by the singer Johnny Ace, which was number 1 on the Billboard R&B chart for 10 weeks. Another successful song for Otis was "So Fine", originally recorded by the Sheiks in 1955 for Federal and a hit for the Fiestas in 1959. As an artist and repertory man for King Records, Otis discovered numerous young prospects who later became successful, including Jackie Wilson, Hank Ballard, and Little Willie John.[13]

Otis hosted a television show, The Johnny Otis Show, and became an influential disc jockey in Los Angeles, with a program on radio station KFOX in Long Beach in 1955.[20]

In 1955, Otis started his own label, Ultra Records (he changed the name to Dig after releasing five singles). He continued to perform and appeared on TV shows in Los Angeles from 1957. On the strength of their success, he signed with Capitol Records. Featuring the singer Marie Adams and with his band, now known as the Johnny Otis Show, he made a comeback, at first in the British charts with "Ma! He's Making Eyes at Me" in 1957.[21] In April 1958, he recorded his best-known song, "Willie and the Hand Jive", a clave-based vamp. It was a hit in the summer of 1958, peaking at number 9 on the U.S. Pop chart, and was Otis's only Top 10 single. The single reached number 1 on the Billboard R&B chart. Otis's success with the song was somewhat short-lived, and he briefly moved to King Records in 1961, where he worked with Johnny "Guitar" Watson.[13]

In 1969, Otis landed a deal with Columbia Records and recorded the albums Cold Shot! and the sexually explicit Snatch and the Poontangs, both of which featured his son Shuggie and the singer Delmar "Mighty Mouth" Evans.[22] A year later, he recorded a double live album of his band's performance at the Monterey Jazz Festival, Johnny Otis Show Live at Monterey! with Little Esther Phillips, Eddie "Cleanhead" Vinson, Pee Wee Crayton, Ivory Joe Hunter, and The Mighty Flea, among others. A portion of the performance was featured in the Clint Eastwood film Play Misty for Me.

In the 1980s, Otis had a weekly radio show, airing Monday from 8 to 11 p.m. on the Los Angeles radio station KPFK, on which he played records and received as guests R&B artists such as Screamin' Jay Hawkins.[23] Otis also recorded with his sons, Shuggie (guitar) and Nicky (drums), releasing the albums The New Johnny Otis Show (1982), Johnny Otis! Johnny Otis! (1984) and Otisology (1985).[13] In the summer of 1987, Otis hosted his own Red Beans & Rice R&B Music Festival in Los Angeles, which featured top-name acts and hosted a Southern-style red beans and rice cook-off. He moved the festival to the city of San Dimas, where it ran annually in association with the Los Angeles County Department of Parks and Recreation for twenty years, until 2006.[24]

Otis and his family moved from southern California to Sebastopol, California, a small apple-farming town in Sonoma County. He continued performing in the United States and Europe through the 1990s, headlining the San Francisco Blues Festival in 1990 and 2000. In 1993, he opened the Johnny Otis Market[25][26][27][28] in Sebastopol, a deli, grocery, and cabaret, where he and his band played sold-out shows[29] every weekend until it closed in 1995.[30][31][32] He was inducted into the Rock and Roll Hall of Fame and the Blues Hall of Fame in 1994.[33]

In the 1960s, Otis entered journalism and politics. He lost an election for a seat in the California State Assembly. He then became deputy chief of staff[34] to state Assemblyman, later, Democratic Congressman Mervyn M. Dymally.[35]

Otis also founded[36] and preached in the New Landmark Community Gospel Church, [37] which held Sunday services in Santa Rosa, California. Landmark's worship services centered on Otis's preaching and the traditional-style performances of a vocal group and choir backed by his rhythm section and an organist.[38] The church closed in mid-1998.

The Johnny Otis Show, relocated from KPFK to sister station KPFA in Berkeley, California, where it aired on Saturday mornings. After his market in Sebastopol opened in 1994, Otis broadcast from there, with his band playing live on the air, later broadcasting from the Powerhouse Brewing Co.[39] After Otis' retirement in late 2004, his grandson Lucky hosted the show at KPFA for two years, until its final airing in late 2006, when Otis and his wife moved back to Los Angeles.[40]

Otis died of natural causes on January 17, 2012, in the Altadena area of Los Angeles. He died three days before Etta James, whom he had discovered in the early 1950s.[2] He is interred with his wife at Mountain View Cemetery in Altadena, California, USA.[42]

This article uses material from the article Johnny Otis from the free encyclopedia Wikipedia and it is licensed under the GNU Free Documentation License.