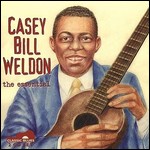 Weldon was born in Pine Bluff, Arkansas, and later lived and worked in Chicago, Illinois. He was one of the early musicians who recorded playing slide guitar.[2] He played upbeat, hokum and country blues tunes. Playing a National steel guitar flat on his lap Hawaiian style, he was known as the "Hawaiian Guitar Wizard".

Weldon was married to the singer and guitarist Memphis Minnie in the 1920s.

Only recently it has been widely accepted that he is not the musician Will Weldon, who recorded between 1927 and 1928 as a member of the Memphis Jug Band.[3][4]

Weldon cut over 60 sides for Bluebird and Vocalion. He was also an active session guitarist, performing on records by Teddy Darby, Bumble Bee Slim, Peetie Wheatstraw, and Memphis Minnie. On Memphis Minnie's last recording for Bluebird Records, in October 1935, Weldon accompanied her for the first time. He played on two sides, "When the Sun Goes Down, Part 2" and "Hustlin' Woman Blues".[5] He had solo hits with his two best-known songs, "Somebody Done Changed the Lock on That Door"[6] and "We Gonna Move to the Outskirts of Town".

After his divorce from Memphis Minnie, he married the blues singer Geeshie Wiley. They disappeared from the public eye soon after, and he had stopped recording by 1938.

His date of death is unknown but is presumed to be sometime around 1970.[7]

He played a National steel guitar flat on his lap Hawaiian style. His slide guitar solos were emotional and unique. His style of playing was highly influential on the emerging Chicago Blues style.[2]

This article uses material from the article Casey Bill Weldon from the free encyclopedia Wikipedia and it is licensed under the GNU Free Documentation License.