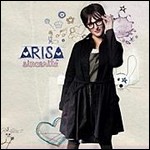 Arisa was born in Genoa, Italy. A week after her birth, her family moved back to their original hometown, Pignola, a village a few kilometres far from Potenza.[1] Her artistic name is an acronym of her family members' names: A from her father, Antonio; R from her own name, Rosalba; I and S from her sisters, Isabella and Sabrina; and A from her mother, Assunta.[1]

In 1999, she won the first prize in the Cantacavallo competition in Teggiano for her remarkable singing ability. The president of the jury, journalist and writer Bianca Fasano, personally delivered the cup.

Arisa rose to fame after her participation in the Sanremo Music Festival 2009.[1] She placed first in the newcomers' section and won the 'Mia Martini' Critics Award with her entry, "Sincerità". In early 2009, she released her first album titled "Sincerità". In January 2010 she released her second album "Malamoreno". In late 2011 she starred as judge in the fifth season of the Italian version of The X Factor, broadcast on Sky Uno.[2]

In February 2012, Arisa returned to the Italian musical scene, performing her single "La notte" on the Sanremo Music Festival 2012. The song placed second in the competition[3] and it later topped the Italian Singles Chart.[4] It was also included in her third studio album, Amami, which was released on 15 February 2012.[5]

In February 2014, Arisa returned to the Sanremo Music Festival 2014. She presented "Controvento" and won the competition.

This article uses material from the article Arisa from the free encyclopedia Wikipedia and it is licensed under the GNU Free Documentation License.

Fresh Out Christone "Kingfish" Ingram & Buddy Guy
Update Required To play the media you will need to either update your browser to a recent version or update your Flash plugin.