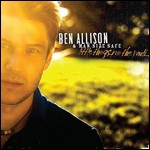 Ben Allison (born 17 November 1966, New Haven, CT) is an American bassist, composer, recording artist, bandleader, educator and activist. He has recorded 11 albums as a leader. In addition to his work as a performer, he co-founded the non-profit Jazz Composers Collective and served as its Artistic Director for 12 years. Allison is an adjunct professor at New School University and serves on the board of the NY chapter of the National Academy of Recording Arts and Sciences, where he chairs the Advocacy Committee.

Allison began guitar lessons at the age of 9 at the Neighborhood Music School and privately with guitarist George Raccio. From 1983-85, Allison studied West African, Haitian and Cuban drumming traditions with Richard Hill and attended the ACES Educational Center for the Arts (ECA), a performing arts school, and Wilbur Cross High School. In his senior year he studied briefly with bassist Steve Swallow and took classes in 20th century music and early childhood development at Yale University. Allison entered New York University in 1985 as a University Scholar to pursue a degree in jazz performance and bass studies. While at NYU he studied with Joe Lovano, Dennis Irwin, Jim McNeely and Steve LaSpina. Allison graduated from NYU in 1989 with a B.A. in Music Performance.

In 1992, Allison and several colleagues formed the Jazz Composers Collective, a musician-run, non-profit organization dedicated to fostering the creation and performance of new music and building audiences for jazz. The Collectives annual concert series ran for 12 seasons and featured the work of 50 composers, the participation of more than 250 musicians and the premiere of more than 300 new works. Allison served as the Artistic Director of the Collective from its inception until its dissolution in 2005. Advisory Board members of the Collective included Dave Liebman, Joe Lovano and Andrew Hill.

The 90s saw the release of Allison's first albums as a leader, beginning with Seven Arrows on Koch Records in 1996, which featured his original music. In 1998, he released Medicine Wheel,[1] the first of nine albums for Palmetto Records. His second album for Palmetto, Third Eye,[2] came out in 1999 and featured instruments rarely heard in a jazz setting, including the oud, cumbus, cello, and bass clarinet, along with the more typical piano, saxophones, trumpet, bass and drums. The album reached #1 on the CMJ jazz charts in September of that year and remained in the top spot for 9 weeks.

He also performed on recordings by Collective members Frank Kimbrough, Ron Horton, Michael Blake and Ted Nash, and recorded twice with noted saxophonist Lee Konitz. Allison was a key figure in the Herbie Nichols Project, a band made up primarily of Collective members. The band researched and performed the music of pianist/composer Herbie Nichols, releasing three albums: Love Is Proximity (Soul Note, 1996), Dr. Cyclop's Dream (Soul Note, 1999)[3] and Strange City (Palmetto, 2001).[4] The albums featured many previously unrecorded Nichols compositions unearthed by members of the group at the Library of Congress in Washington, DC.

Allison began working at New School University in 1996, serving as an adjunct professor and bass instructor. He also taught instrumental lessons and ensembles at the Third Street Music School.

Allison continued his role as artistic director of the Jazz Composers Collective through 2005, when the members of the Collective decided that they had realized many of their initial goals and the organization was dissolved.

This was another busy period of recording for Allison, who released six albums as a leader for Palmetto between 2000 and 2009, including Peace Pipe (2002),[5] which explored the fusion of jazz and West African music and featured Malian kora player Mamadou Diabaté; Cowboy Justice (Palmetto, 2006),[6] which marked the beginning of his use of electric guitar as a dominant voice in his compositions and band sound; and Little Things Run The World, which NPR's Tom Vitale called "a turn to simplicity for a progressive jazz musician."[7]

As a member of the Collective, Allison received numerous commissioning and performing grants from organizations including The Mary Flagler Cary Charitable Trust, American Composers Forum, Meet The Composer, Mid Atlantic Arts Foundation, Chamber Music America, The Aaron Copland Fund for Music, and The National Endowment for the Arts.

He performed on more than a dozen additional recordings as a co-leader or sideman, including albums by Curtis Stigers, Larry Goldings and Steven Bernstein.

In 2001, Allison wrote the theme for NPR's On The Media, produced by WNYC and currently heard weekly by 1.5 million listeners.

Allison continued his work at New School University and served as a guest instructor and visiting artist at the Siena Jazz Foundation in Siena, Italy, and at Souza Lima Ensino de Música in São Paulo, Brazil.

Allison won the Rising Star (Bassist) award in the Down Beat critics poll in 2005, 2006 and 2007.[8] He was nominated almost every year in one or more categories: Bassist, Composer, and Rising Star Composer, Arranger, Artist, and Group.[9]

In 2009 Allison was invited to be a member of the Teaching Artists Collaborative at the Weill Music Center at Carnegie Hall. As part of this program, Allison taught musical fundamentals to children in the public school system in Harlem, New York City, using student-created poetry, spoken word and song.

Allison continues to record and perform around the world. He released his ninth Palmetto Records album, Action-Refraction, in 2011.[11][12] The album is unique among Allisons releases as a leader for its focus on non-original music. It contains reworkings of compositions by Donny Hathaway, PJ Harvey, Samuel Barber, Thelonious Monk, and Neil Young, among others. The album reached #1 on the CMJ jazz radio charts in May, 2011.[13]

In 2012, as a representative of the Recording Academy (NARAS) Allison testified before the House Committee on Energy and Commerce on issues relating to performing rights.[15][16]

As a sideman or co-leader (selected recordings)

This article uses material from the article Ben Allison from the free encyclopedia Wikipedia and it is licensed under the GNU Free Documentation License.

Moon River George Benson & Joey DeFrancesco
Update Required To play the media you will need to either update your browser to a recent version or update your Flash plugin.