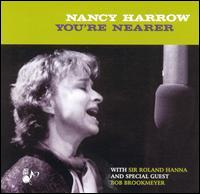 Harrow studied classical piano from age seven, then decided to pursue careers in dancing and singing. She released an album for Candid Records in 1960 (featuring Kenny Burrell, Buck Clayton, Dickie Wells, and Milt Hinton) and one for Atlantic Records in 1962 (featuring John Lewis, Dick Katz, Phil Woods, Jim Hall, Richard Davis, and Connie Kay), then left music to raise a family, returning to a career in music in 1975. Since then she has worked with Katz and Woods again, Clark Terry, Roland Hanna, and Bob Brookmeyer, among others. She has recorded 16 albums, five of them her own inventions (music and lyrics) based on literary subjectsa Willa Cather novel (Lost Lady), a novel by Nathaniel Hawthorne (The Marble Faun), and songs based on the life of F. Scott Fitzgerald (Winter Dreams). The Winter Dreams CD formed the nucleus of This Side of Paradise, a new musical about Zelda and Scott Fitzgerald which ran for 6 weeks in NYC in 2010 at the Theatre at St. Clements. A second production opened April 20, 2013 at the History Theatre in St. Paul, Minnesota and ran until May 19. Two of Harrow's song cycles were based on children's stories: The Adventures of Maya the Bee, by Waldemar Bonsels, ran as a puppet show in NYC for seven years and was translated into Japanese and toured ten cities in Japan for two years; Maya the Bee reopened at the Culture Project in NYC September 29, running until mid-May, 2013. The Cat Who Went to Heaven, based on a story by Elizabeth Coatsworth, had short runs in NYC at the Mercer Street Theater, the Asia Society, and the Harlem School of the Arts. It had 11 performances at the Kennedy Center in the spring of 2011, and will be performed at the Brooklyn Academy of Music (BAM) from April 8-April 13, 2014.

Harrow is the mother of Galaxie 500 / Damon and Naomi member Damon Krukowski.[1]

This article uses material from the article Nancy Harrow from the free encyclopedia Wikipedia and it is licensed under the GNU Free Documentation License.

Why Don't You Do Right Robi Weber Quartet
Update Required To play the media you will need to either update your browser to a recent version or update your Flash plugin.