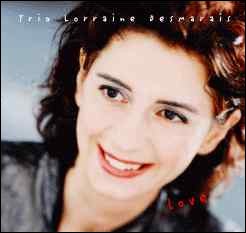 Lorraine Desmarais C.M. (born August 15, 1956) is a French-Canadian jazz pianist and composer. Born in Montreal, she earned a B.Mus. (1977) and M.Mus. (1979) in classical piano at Université de Sherbrooke. She studied with Armas Maiste at McGill University in 1978-79, and later took lessons from Kenny Barron in New York.[1] She has also been influenced by Chick Corea and Oscar Peterson.

Desmarais has recorded ten albums as a solo performer and musical director, including several with well-known artists such as Michel Cusson and Michel Donato (Vision), Tiger Okoshi (Lorraine Desmarais), Don Alias (Andiamo), André Moisan, Jean Gaudreault and Ted Baskin from the Montreal Symphony Orchestra and Michel Bettez from the Orchestre Métropolitain (Bleu Silence), in addition to her long-standing team of Frédéric Alarie (double bass) and Camil Bélisle (drums). She has composed a number of pieces for herself and for other performers, including Oliver Jones and Angèle Dubeau.[1]

She has been teaching in colleges and universities since 1985, and is a jazz piano professor at the Cégep Saint-Laurent in Montreal.[1]

Desmarais was appointed a Member of the Order of Canada in 2012.[2]

This article uses material from the article Lorraine Desmarais from the free encyclopedia Wikipedia and it is licensed under the GNU Free Documentation License.

I lob you Alain Guyonnet Tentet
Update Required To play the media you will need to either update your browser to a recent version or update your Flash plugin.