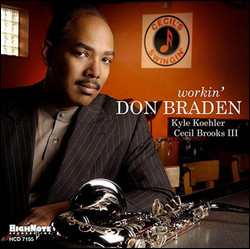 Braden was born in Cincinnati, Ohio and raised in Louisville, Kentucky. He began playing tenor sax at age 13 and started playing professionally at 15. As a high schooler he played in the McDonald's All-American High School Jazz Band. He attended Harvard University from 1981 to 1984 and studied engineering there, but also played in the school's jazz ensemble. He moved to New York City in 1984, where he played with The Harper Brothers, Lonnie Smith, and Betty Carter. In 1986-87 he toured with Wynton Marsalis, and following this played with Out of the Blue, Roy Haynes, Tony Williams, Freddie Hubbard, J.J. Johnson, Tom Harrell, Art Farmer, and the Mingus Big Band.

This article uses material from the article Don Braden from the free encyclopedia Wikipedia and it is licensed under the GNU Free Documentation License.

This Man, This Monster Duke Robillard Band
Update Required To play the media you will need to either update your browser to a recent version or update your Flash plugin.