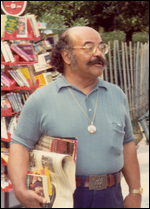 Milton Brent Buckner was born in St. Louis, Missouri. His parents encouraged him to learn to play piano, but they both died when he was nine years old. Milt and his younger brother were sent to Detroit where they were adopted by members of the Earl Walton band:[2] trombonist John Tobias, drummer George Robinson (Milt) and reedplayer Fred Kewley (Ted).[4] Buckner studied piano for three years from the age 10, then at 15 began writing arrangements for the band, he and his brother going on to become active in the Detroit jazz world in the 1930s.[4]

Buckner first played in Detroit with the McKinney Cotton Pickers and then with Cab Calloway. In 1941 he joined Lionel Hampton's big band, and for the next seven years served as its pianist and staff arranger.[3] He led a short-lived big band of his own for two years, but then returned to Hampton's in 1950.[3] In 1952 he formed his own trio, and pioneered the use of the electric Hammond organ.[3] He often played in Europe in the late 1960s. His last studio session took place in Paris on 4 July 1977.[2]

Buckner died in Chicago, Illinois, at the age of 62.

This article uses material from the article Milt Buckner from the free encyclopedia Wikipedia and it is licensed under the GNU Free Documentation License.