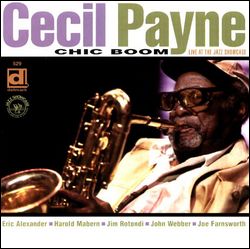 Cecil Payne (December 14, 1922 – November 27, 2007) was an American jazz baritone saxophonist born in Brooklyn, New York. Payne also played the alto saxophone and flute. He played with other prominent jazz musicians, in particular Dizzy Gillespie and Randy Weston, in addition to his solo work as bandleader.

Payne received his first saxophone at the age of 13, asking his father for one after hearing "Honeysuckle Rose" performed by Count Basie with Lester Young soloing. Payne took lessons from a local alto sax player, Pete Brown. He studied at Boys High School, Bedford-Stuyvesant.[1]

Payne began his professional recording career with J. J. Johnson on the Savoy label in 1946. During that year he also began playing with Roy Eldridge, through whom he met Dizzy Gillespie. His earlier recordings would largely fall under the swing category, until Gillespie hired him. Payne stayed on board until 1949, heard performing solos on "Ow!" and "Stay On It". In the early 1950s he found himself working with Tadd Dameron, and worked with Illinois Jacquet from 1952 to 1954. He then started freelance work in New York City and frequently performed during this period with Randy Weston, whom Payne worked with until 1960.[2] Payne was still recording regularly for Delmark Records in the 1990s, when he was in his seventies, and indeed on into the new millennium.

Payne was a cousin of trumpeter Marcus Belgrave, whom he recorded with briefly.[3] Aside from his career in music, Payne helped run his father's real estate company during the 1950s.[4] Payne once said that his parents urged him to consider dentistry as a career. He countered their suggestion by pointing out that no one would ever entrust his or her teeth to a "Dr. Payne".[5]

This article uses material from the article Cecil Payne from the free encyclopedia Wikipedia and it is licensed under the GNU Free Documentation License.

Sweet Billie Slidestream
Update Required To play the media you will need to either update your browser to a recent version or update your Flash plugin.