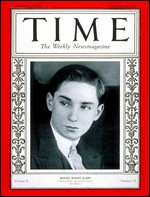 Roger Wolff Kahn (Wolff was his middle name's original spelling) was born in Morristown, New Jersey into a wealthy German Jewish banking family. His parents were Adelaide "Addie" (Wolff) and Otto Hermann Kahn, a famous banker and patron of the arts. His maternal grandfather was banker Abraham Wolff. Otto and Roger Kahn were the first father and son to appear separately on the cover of Time magazine: Otto in November 1925 and Roger in September 1927, aged 19.

Kahn is said to have learned to play 18 musical instruments before starting to lead his own orchestra in 1923, aged only 16. In 1925, Kahn appeared in a short film made in Lee De Forest's Phonofilm sound-on-film process. Kahn hired famous jazz musicians of the day to play in his band, especially during recording sessions, for example Joe Venuti, Eddie Lang, Artie Shaw, Jack Teagarden, Red Nichols, and Gene Krupa.

Recordings were made for:

Kahn always had fun leading and conducting his orchestra. Reportedly, when the band was playing especially well he used to throw himself onto the floor and wave his legs in the air. However, in the mid-1930s, he lost interest in his orchestra and disbanded it. Instead, he preoccupied himself with aviation and eventually, in 1941, became a test pilot for the Grumman Aircraft Engineering Corporation, a well-known aircraft manufacturer. Kahn would also excel in the role of managing the technical service and sales division of Grumman aircraft and Grumman built a special sales aircraft, known as a G-58B (a modified F8F Bearcat fighter plane), in which he toured numerous military bases across North America during his career with the company.

In 1931, Kahn made headlines on the New York society pages when he married musical comedy actress Hannah Williams January 16, 1931. The wedding was at Oheka Castle, his family's estate on Long Island, and was kept secret from the public for two weeks, until the Broadway show Williams was appearing in, Sweet and Low, had had its final performances. The couple made headlines again when they divorced two years later and when, after only a few weeks, Williams married boxing champion Jack Dempsey. Two days after the divorce, on April 7, 1933, Roger Wolfe Kahn married Edith May Nelson, a Maine politician's daughter. That marriage lasted until Kahn's death of a heart attack in New York City on July 12, 1962. By his second wife, he had two children, Peter W. Kahn and Virginia Kahn.

In the 1979 film The Jerk, listening to the orchestra performing the song "Crazy Rhythm" on the radio inspires Steve Martin's character to hitchhike to St. Louis, setting in motion his rise, fall, and eventual reunion with his adopted family.

This article uses material from the article Roger Wolfe Kahn from the free encyclopedia Wikipedia and it is licensed under the GNU Free Documentation License.