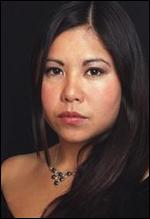 Nikki Yeoh (born 23 May 1973) is a British jazz pianist, keyboardist and composer, known for her work with Courtney Pine, Neneh Cherry, Phillip Bent, Dick Heckstall-Smith, Chante Moore, The Roots and Steve Williamson, among others. Born in London, Yeoh is of mixed race origin, having a father from Malaysia of Chinese descent, and an English mother.

Yeoh won The Independent award for Best Jazz Musician of the Year in 1996 and in 1999 was a semi-finalist at the piano competition at the Montreux Jazz Festival.[1]

Yeoh collaborates with drummer Mark Mondesir and his bassist brother, Michael Mondesir in Jazz trio Infinitum[2] and also performs as part of The AllStars Collective[3] Yeoh collaborated with The Roots in the 1994 Montreux Jazz Fest[4]

This article uses material from the article Nikki Yeoh from the free encyclopedia Wikipedia and it is licensed under the GNU Free Documentation License.