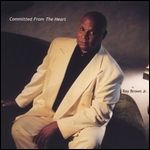 The adopted son of Ray Brown and Ella Fitzgerald, he was born in New York City, New York to Fitzgerald's half-sister Frances. Nat King Cole, Louis Armstrong, Frank Sinatra and many others were regular visitors during his childhood.[1]

After moving to California when he was 10, Ray discovered a passion for the drums and for singing. He attended Beverly Hills High School where he sang with school groups which toured at local festivals and hospitals.[2]

His father arranged for him to study with jazz percussionists Bill Douglass and Chuck Flores. Despite his jazz roots he admits that his interest in performing rock music was an act of rebellion. "I used to drive my parents crazy with this. I told my father a few years before he died, you know a lot of times I played that music 'cause I just wanted to see the look on your face.".[1]

His mother's 1964 single "Ringo Beat" was inspired by her son's interest in rock music.

He moved to Seattle in 1971, studying with another drummer, Bill Coleman, Sr. It was at this time that Brown, Jr. began writing songs in addition to playing drums and piano.

In the late 1980s Brown toured the Pacific Northwest, Canada, Alaska, Japan, Korea and Guam performing in tours for the United States Department of Defense. Like his famous parents, Brown, Jr. says he loves performing on the road. He states,

"I love to tour. I've been able to see a lot of the world and I just absolutely enjoyed being able to be with different types of people, different cultures and to see the world. It's just kind of broadened who I am as a person, which eventually will filter down into the music, the influences.".[1]

In 2001, Brown recorded his debut album Slow Down for Love on SRI Jazz, which reached the top 50 of the Gavin Report. His second album, Committed from the Heart, was released in 2003. His sound has been described as an adult contemporary pop sound layered with R&B.[3] Ray Brown, Jr. wrote and arranged all the songs on both CDs.

Additionally in 2003, Brown debuted on the Las Vegas Strip, performing five nights a week in the Le Bistro Theater at the Riviera hotel and casino.[4]

In 2007, Brown appeared in a BBC documentary talking about his famous mother entitled Ella Fitzgerald: First Lady of Song.[3]

Also in 2007, Brown attended the ceremony for the new Ella Fitzgerald stamp produced by the United States Postal Service. He also traveled to various events commemorating what would have been his mother's 90th birthday.

This article uses material from the article Ray Brown, Jr. from the free encyclopedia Wikipedia and it is licensed under the GNU Free Documentation License.

The Lady's In Love With You John Pizzarelli with The George Shearing Quintet
Update Required To play the media you will need to either update your browser to a recent version or update your Flash plugin.