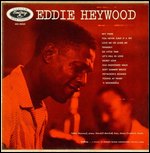 Not to be confused with Eddie Hayward.

His father, Eddie Heyward, Sr. was also a jazz musician from the 1920s and provided him with training from the age of 12 as an accompanist playing in the pit band in a vaudeville theater in Atlanta, occasionally accompanying singers such as Bessie Smith and Ethel Waters. Heywood moved, first to New Orleans and then to Kansas City, when vaudeville began to be replaced by sound pictures.[1] Heywood played with several popular jazz musicians such as Wayman Carver in 1932, Clarence Love from 1934 to 1937 and Benny Carter, who heard him in Kansas City playing with Clarence Love, from 1939 to 1940 after moving to New York in 1938.[2]

After starting his band, Heywood would occasionally do back-up for Billie Holiday in 1941. In 1943, Heywood took several classic solos on a Coleman Hawkins quartet date (including "The Man I Love") and put together a sextet, including Doc Cheatham and Vic Dickenson. After their version of "Begin the Beguine" became a hit in 1944, they had three successful years.[2]

Then, in 1947, Heywood was stricken with a partial paralysis of his hands and could not play at all.[2] However, it did not stop him when he made a comeback in 1951. In the 1950s, Heywood composed and recorded "Land of Dreams" and "Soft Summer Breeze" and is probably best known for his 1956 recording of his composition "Canadian Sunset", all of which he recorded with Hugo Winterhalter and his orchestra. After a second partial paralysis from 1966 to 1969, Heywood made another comeback and continued his career into the 1980s.[2]

Heywood died at home in Miami, Florida, aged 73. Parkinson's disease had been complicated by Alzheimer's disease, and Heywood had been in poor health for five years.[1]

Eddie Heywood has a "Star" at 1709 Vine Street on the Hollywood Walk of Fame.

Heywood has two sons, Robert and Edward, and one granddaughter, Bailey.

This article uses material from the article Eddie Heywood from the free encyclopedia Wikipedia and it is licensed under the GNU Free Documentation License.

Centenary Blues Olivier Theurillat & Jean-François Zbinden & Bernard Fedi & Denis Vonlanthen
Update Required To play the media you will need to either update your browser to a recent version or update your Flash plugin.