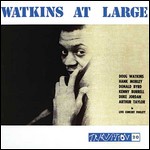 Some of Watkins' best-known work can be heard when as a 22-year-old he appeared on the 1956 album, Saxophone Colossus by tenor saxophonist Sonny Rollins, with Max Roach and Tommy Flanagan. From that session, the tunes "Blue Seven" and "St. Thomas," especially, have become revered not only as evidence of Rollins' original genius but as fine examples of Watkins' work.

According to Horace Silver's autobiography, Let's Get to the Nitty Gritty, Watkins, along with Silver, later left Art Blakey's Jazz Messengers because the other members of the band at the time (Kenny Dorham, Hank Mobley and Blakey) had serious drug problems, whereas Watkins and Silver were tired of being harassed and searched by the police every time they went to a gig in a new city and club.[2]

In 1958 Watkins would join Donald Byrd for a European tour, taking up extended residence at Le Chat Qui Pêche, a jazz club on Paris' Left Bank. Along with Byrd, tenor saxophonist Bobby Jaspar, pianist Walter Davis, Jr. and drummer Art Taylor, Watkins made two albums with Byrd during this time, one recorded in the club and another at a formal concert featuring Byrd's quintet.

Watkins was known for his superb tone and distinct phrasing. He had a distinct walking tone and was right on the beat, forming an organic, indivisible relationship with his instrument as he swayed with it in perfect time. Pianist Red Garland often stated that Watkins was his favorite bassist and that he was always in tune and never off-key. Watkins played with Garland in 1959, along with drummer Specs Wright.

While Watkins lived only to the age of 27, he appeared on well over 350 LPs in his career backing many major jazz stars of the time. When Charles Mingus briefly ventured over to the piano stool in 1961, he hired Watkins to take over the bass part; Oh Yeah!!! and Tonight at Noon were the results of this adventurous interlude.

Watkins recorded only two albums as leader. Watkins at Large (1956) is an album for the tiny Transition label, made with fellow members of the Horace Silver Quintet of the time—most recently it has been available on a two-disc set, The Transition Sessions (Blue Note, 2002), which incorporates two additional Transition dates on which Watkins appears.

The other Watkins-led session, Soulnik (1960), with Yusef Lateef and reissued as part of the OJC series, features Watkins on cello with Herman Wright backing him on bass. The cello was an instrument he had started to play only three days before the recording session.

Watkins died in an automobile accident on February 5, 1962, while traveling from Arizona to San Francisco to meet drummer Philly Joe Jones for a gig. He fell asleep at the wheel and was hit head-on by an oncoming truck. The other occupants of the car, pianist Sir Roland Hanna and trumpeter Bill Hardman, survived the crash. Watkins made enough recordings with seminal musicians, especially Blakey, Silver, Mobley, Byrd and Rollins, to ensure his lasting reputation as a superb musician, an unselfish and enabling ensemble player, and a bassist-walker with few peers.

Doug Watkins and Paul Chambers were best friends from high school. Doug introduced Paul to his next door neighbor and childhood friend Annie Williams. Doug knew Paul and Annie liked one another and he liked them. He was Paul's best man at their wedding. Doug and Paul started a rumor that they were cousins as a joke because they looked alike, dressed alike and were tall. People still confused the two as each other. They were best friends until Doug's untimely death in 1962. Doug and Paul were not related other than loving one another as friends and fellow bass players.

This article uses material from the article Doug Watkins from the free encyclopedia Wikipedia and it is licensed under the GNU Free Documentation License.