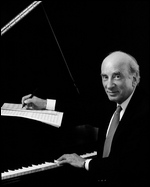 Richard Hyman (born March 8, 1927) is an American jazz pianist and composer. Over a 60-year career, he has functioned as a pianist, organist, arranger, music director, electronic musician, and, increasingly, as a composer. He was named a National Endowment for the Arts Jazz Masters fellow in 2017.[1]

Hyman was born in New York City, to Joseph C. Hyman and Lee Roven. He was trained classically by his mother's brother, the concert pianist Anton Rovinsky, a fixture of the pre-war art scene in New York, noted for having premiered some of Charles Ives's works, such as The Celestial Railroad in 1928.[2] Hyman said of Rovinsky, "He was my most important teacher. I learned touch from him and a certain amount of repertoire, especially Beethoven. On my own I pursued Chopin. I loved his ability to take a melody and embellish it in different arbitrary ways, which is exactly what we do in jazz. Chopin would have been a terrific jazz pianist. His waltzes are in my improvising to this day."[2][3] Dick's older brother, Arthur, introduced him to the music of Bix Beiderbecke, Louis Armstrong, Teddy Wilson, and others. By high school, he was playing in dance bands throughout Westchester County.

Hyman completed his freshman year at Columbia University, and in June 1945, he enlisted in the Army, transferred to the Navy, and began playing in the band department. When he returned to Columbia, he won an on-air piano competition, earning him 12 free lessons with Teddy Wilson, the Swing Era pianist who a decade earlier had broken the race barrier as a member of the Benny Goodman Trio. A few years later, Hyman himself became Goodman's pianist.[4]

While developing a facility for improvisation in his own piano style, Hyman has also investigated ragtime and the earliest periods of jazz and has researched and recorded the piano music of Scott Joplin, Jelly Roll Morton, James P. Johnson, Zez Confrey, Eubie Blake and Fats Waller which he often features in his frequent recitals. Hyman recorded two highly regarded ragtime albums under the pseudonym "Knuckles O'Toole", and included two original compositions. In 1952, he played with Charlie Parker on the only television appearance Parker ever made; the band included Dizzy Gillespie and played Hot House.

In the 1960s, he was regularly seen on NBC-TV's weekly musical series Sing Along with Mitch. Other solo recordings include the music of Irving Berlin, Harold Arlen, Cole Porter, George Gershwin, and Duke Ellington. He recorded as a member of the Dick Hyman Trio, including a 45 rpm hit called 'Moritat - A Theme from The Threepenny Opera' (aka 'Mack the Knife') b/w 'Baubles Bangles and Beads' for M-G-M Records in 1955, issued on M-G-M K12149.[5] During the 1970s, he was also member of Soprano Summit.

Hyman served as artistic director for the Jazz in July series at New York's 92nd Street Y for twenty years, a post from which he stepped down in 2004. (He was succeeded in that post by his cousin, Bill Charlap, a jazz pianist.) He continues his Jazz Piano at the Y series as well as his post as jazz advisor to The Shedd Institute's Oregon Festival of American Music. In 1995, he was inducted into the Jazz Hall of Fame of the Rutgers Institute of Jazz Studies and the New Jersey Jazz Society.

Hyman has had an extensive career in New York as a studio musician and won seven Most Valuable Player Awards from the National Academy of Recording Arts and Sciences. He acted as music director for such television programs as Benny Goodman's final appearance (on PBS) and for In Performance at the White House. For five years (1969–1974), he was the in-studio organist for the stunt game show Beat the Clock. He received an Emmy Award for his original score for Sunshine's on the Way, a daytime drama, and another for musical direction of a PBS Special on Eubie Blake. He continues to be a frequent guest performer with The Jim Cullum Jazz Band on the long-running public radio series Riverwalk Jazz, and has been heard on Terry Gross' Fresh Air. He has also collaborated with Ruby Braff extensively on recordings at Arbors Records.

Dick Hyman's Century of Jazz Piano, an encyclopedic series of solo performances, has been released on Arbors Records. Other new recordings include Thinking About Bix and E Pluribus Duo with Ken Peplowski.

Hyman has served as composer/arranger/conductor/pianist for the Woody Allen films Zelig, The Purple Rose of Cairo, Broadway Danny Rose, Stardust Memories, Hannah and Her Sisters, Radio Days, Bullets Over Broadway, Everyone Says I Love You, Sweet and Lowdown, The Curse of the Jade Scorpion and Melinda and Melinda. He was also the music coordinator, arranger, and conductor for Allen's multi-Oscar-winning Mighty Aphrodite, which featured the Dick Hyman Orchestra and Chorus.

His other film scores include Moonstruck, Scott Joplin, The Lemon Sisters and Alan and Naomi. His music has also been heard in Mask, Billy Bathgate, Two Weeks Notice, and other films. He was music director of The Movie Music of Woody Allen, which premiered at the Hollywood Bowl.[6]

Hyman composed and performed the score for the Cleveland/San Jose Ballet Company's Piano Man, and Twyla Tharp's The Bum's Rush for the American Ballet Theatre. He was the pianist/conductor/arranger in Tharp's Eight Jelly Rolls, Baker's Dozen, and The Bix Pieces and similarly arranged and performed for Miles Davis: Porgy and Bess, a choreographed production of the Dance Theater of Dallas. In 2007, his Adventures of Tom Sawyer, which had been commissioned by the John G. Shedd Institute for the Arts, and set by Toni Pimble of the Eugene Ballet, premiered in Eugene, Oregon.

In the 1960s, Hyman recorded several pop albums on Enoch Light's Command Records. At first, he used the Lowrey organ, on the albums Electrodynamics (US No. 117), Fabulous (US No. 132), Keyboard Kaleidoscope and The Man from O.R.G.A.N. He later recorded several albums on the Moog synthesizer which mixed original compositions and cover versions, including Moog: The Electric Eclectics of Dick Hyman, and The Age of Electronicus (US No. 110).

The track "The Minotaur" from the aforementioned 1969 album...The Electric Eclectics... charted in the US top 40 (US R&B Singles No. 27; Hot 100 No. 38),[7] (No. 20 Canada) becoming the first Moog single hit (although, as originally released on 45, it was labeled as the B-side to the shorter "Topless Dancers of Corfu"). Some elements from the track "The Moog and Me" (most notably the whistle that serves as the song's lead-in) on the same album were sampled by Beck for the track "Sissyneck" on his 1996 album Odelay.

With Don Elliott and Rusty Dedrick

With Major Holley and Slam Stewart

With Bob Wilber and Kenny Davern

This article uses material from the article Dick Hyman from the free encyclopedia Wikipedia and it is licensed under the GNU Free Documentation License.

Angel Town Mezzoforte
Update Required To play the media you will need to either update your browser to a recent version or update your Flash plugin.