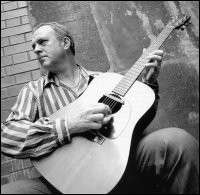 Robbie McIntosh (born 25 October 1957) is an English guitarist. McIntosh is well known as a session guitarist and member of The Pretenders from 1982 until 1987. In 1988 he began doing session guitar work for Paul McCartney joining his band full-time until early 1994. He continues to do session work and has performed both as a sideman with John Mayer and with his own band, The Robbie McIntosh Band.

McIntosh was born in Sutton, Surrey, and started playing the guitar at the age of ten, picking out things from any records listened to at the time. He had two older sisters, and their record collections became early influences: The Beatles, The Rolling Stones, The Kinks, The Spencer Davis Group, Jimi Hendrix etc. His father's love of jazz was also a factor: Fats Waller, Django Reinhardt, Louis Armstrong – and his mother played the piano.

At age 13, he started taking classical guitar lessons from a teacher called Michael Lewin, who later became a professor at the Royal Academy of Music.[1] He continued through to Grade 8 (aged 18).

"Lightnin' Hopkins was the first blues artist that captured my imagination; I've been besotted with blues music ever since."

McIntosh's first band was called 70% Proof. They played original material and covers of Humble Pie, The Who, Free and Stevie Wonder, amongst others. "The other guys in the band (Paul Eager, Russell Ayles and Graham Mincher) had all left school, so we used to rehearse on Sunday afternoons at the local dump works canteen. We were pretty good really."

McIntosh took A-levels at school, and had plans to study biology at university but failed, so he joined up with older Raynes Park boys Graham and Malcolm Foster in their band The Foster Brothers. He toured and recorded with them throughout 1977; the band gradually folded in early 1978.

After the Foster Bros., McIntosh worked for about six months as a lorry driver for a builder's supply company, delivering sand, cement, bricks and the like on a three-ton lorry; he became an expert tipper. Completely out of the blue, he received a call from Chris Thompson who at the time was the singer in Manfred Mann's Earth Band. He had an outfit called Filthy McNasty who played a lot at The Bridge House, Canning Town, The Golden Lion, Fulham, etc. Thompson asked McIntosh to join as lead guitarist. In November 1978 the band went to Los Angeles to record with Richard Perry for his Planet Record label. The name of the band was changed to "Night."

The band toured in America for most of 1979, supporting The Doobie Brothers.

Chris Thompson and the Islands

Night disbanded sometime in 1980, but Thompson and McIntosh stayed together to form "Chris Thompson and the Islands" with Malcolm Foster, Paul "Wix" Wickens (who would also join McIntosh in Paul McCartney's band in 1989) and Mick Clews. Despite many gigs and various bouts of recording, a deal was never secured and McIntosh left at the end of 1981.

"Even when I'd joined The Pretenders the DMD gigs continued when I could fit them in. We played a bit of everything. Good band."

Sometime in 1977/78 McIntosh met and became friends with James Honeyman-Scott. It was this friendship that led Honeyman-Scott to contact McIntosh in 1982 with a view to his joining The Pretenders as an extra member to help fill out the sound of the band's live sound. Honeyman-Scott died in June '82, and Billy Bremner took over initially; but McIntosh was auditioned and joined The Pretenders in September '82.

He toured extensively and recorded Learning to Crawl and Get Close with the band before leaving in September 1987.

In 1985, McIntosh was the main guitarist on Roger Daltrey's sixth solo album Under a Raging Moon, the album was a tribute to The Who's former drummer Keith Moon who had died in 1978, The album was Daltrey's best charting success in the US and McIntosh was featured on the music video for "Let Me Down Easy" aside Daltrey with Bryan Adams on the other side also playing guitar.

In 1988, McIntosh resumed doing studio work, doing sessions with Paul McCartney. McCartney was preparing a band for his 1989–90 World Tour, and with Chrissie Hynde's endorsement, McIntosh was chosen as the lead guitarist in the new Paul McCartney Band. He appears on all McCartney's albums from 1989 through 1993, and also can be seen in the concert films Get Back and Paul Is Live.

McIntosh went back to doing sessions until about 1998; he started to realise a dream by putting together a band of his own. "I decided to pick some of my favourite players and mates for a band that I thought would give a particular sound and edge to my songs; so I grabbed Paul Beavis, Pino Palladino, Mark Feltham and Melvin Duffy and "The Robbie McIntosh Band" was born. We did some gigs and recorded Emotional Bends, the debut album."

Prior to this, at his friend Douglas Adams' insistence, McIntosh had recorded all his instrumental tunes. "This was a collection of compositions and arrangements that I just played for fun at home to amuse myself. Douglas insisted that I record them. This collection became the album Unsung, which was to be my second album, even though it was recorded before Emotional Bends."

The Robbie McIntosh Band released their next album, Wide Screen, in June 2001. "We did a bunch of gigs after the release of Wide Screen, but owing to a certain amount of domestic upheaval (a house fire in July 2001, had to move out for seven months), the band activity kind of fizzled out. Mark still plays with Nine Below Zero who I go and sit in with now and then. Melvin plays with Los Pacaminos as well as working with Robbie Williams, and I still do sessions and gigs with Paul and Pino so I still see a lot of the guys."

In 2004 McIntosh joined Norah Jones' touring band staying in the band a year for the "Feels Like Home" world tour playing slide, acoustic and electric guitar, mandolin and backing vocals.

McIntosh toured with John Mayer from 2006–2010, providing both rhythm and lead guitar, dobro, and mandolin. He performed all of Mayer's slide guitar work in that certain period as well. In May 2017 he again joined John Mayer on stage, to perform the song Daughters in London.

Since leaving John Mayer's band in 2010 McIntosh has worked periodically with Sinead O'Connor, Sir Tom Jones, Bluesclub and Los Pacaminos in a live capacity but is mainly concentrating on a solo career again having released "Turn Up For The Books" his 5th album, at the beginning of September 2013. Collaborators on the new album include Paul Beavis, Stephen Darrell Smith, Mark Feltham, Pino Palladino, Steve Wilson, Jess Upton, Peter Hope-Evans and McIntosh's own sons and daughters. He plans to tour in 2014 with Beavis, Smith, Wilson, Hope Evans and maybe some members of his family to augment the line up. He also plans to re-kindle his working relationship with singer songwriter Gordon Haskell planning a concert on 11 December 2013 in Southbourne Dorset. He continues also to perform with a trio comprising himself, Steve Wilson and Jess Upton and also with Steve Wilson in a duo. For fun he has a jamming band called "The Steamer Ducks", a seven piece blues band who perform in the Dorset area of the UK.

In August 2014 McIntosh was the lead guitarist for Tom Jones in a concert at Haydock Park, part of Tom Jones' European Tour.

This article uses material from the article Robbie McIntosh from the free encyclopedia Wikipedia and it is licensed under the GNU Free Documentation License.