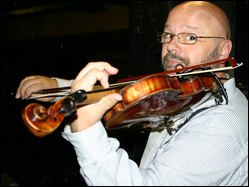 Graham Leslie Lionel Clark (born 16 December 1959) is an English jazz violinist based in Buxton, Derbyshire. He also plays guitar, and double bass; a freelance violinist in most styles of jazz, rock, blues and pop, he specialises in improvisation. Worked with Daevid Allen from 1988 - 1996 (in the psychedelic jazz rock band Gong '90 - '92).

This article uses material from the article Graham Clark (violinist) from the free encyclopedia Wikipedia and it is licensed under the GNU Free Documentation License.