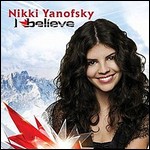 Yanofsky recorded the Ella Fitzgerald song "Air Mail Special" for Verve Records and it was released in June 2007 on the album We All Love Ella: Celebrating the First Lady of Song. Produced by Tommy LiPuma, this track made Yanofsky the youngest singer to record for Verve.[1] She then recorded "Gotta Go My Own Way" in English and French for the movie High School Musical 2.

She collaborated with Herbie Hancock and will.i.am on a crossover version of the swing era hit "Stompin' at the Savoy". It was released on Kareem Abdul-Jabbar's audio book, On the Shoulders of Giants.[2]

Songwriters Stephan Moccio and Alan Frew chose Yanofsky to sing CTV's broadcast theme for the 2010 Winter Olympics, "I Believe", which reached number one on the Canadian Hot 100 on the week of February 27, 2010. This made her the first Canadian artist to have a number one song on that chart. The song was certified "Quadruple Platinum" for digital downloads in April 2010.[4]

In 2010, Yanofsky recorded her first studio album, Nikki, with Phil Ramone.[1] Along with the album-release of "I Believe", it included some of Yanofsky's first original works, collaborating with Jesse Harris, Ron Sexsmith and Feist. Nikki was released in April 2010 by Decca Records and was supported by an international tour. It earned a Juno nomination for "Vocal Jazz Album of the Year" and won Yanofsky the WAVE Smooth Jazz Award for "Female Vocalist of the Year".

For Ganz's October 2010 Webkinz Pet of the Month song, Yanofsky recorded a version of the Webkinz World song "I Dream in Pink".[5]

A 2011 jazz recording of popular Disney songs entitled Everybody Wants to Be a Cat: Disney Jazz, Volume 1 included a version of the song "It's a Small World" sung by Yanofsky. Other jazz artists on the album included Esperanza Spalding, Roy Hargrove, Dave Brubeck, Joshua Redman, and Alfredo Rodriguez.

Yanofsky's second studio album, Little Secret, was released in Canada in May 2014. The album was executive produced by Quincy Jones.

In 2015 Yanofsky began collaborating with Wyclef Jean on her new album and EP. Her Solid Gold EP was released in Canada on September 30, 2016.[6]

Yanofsky began her professional singing career by performing at the 2006 Montreal International Jazz Festival.[1] Only 12 at the time, this performance made her the youngest performer ever to headline at the festival. She has returned each year since, including a special outdoor performance for the festival's 30th Anniversary in 2009 and a performance with l'Orchestre Métropolitain in 2011. Her other Canadian festival performances include Toronto (Luminato and Downtown), Ottawa (Jazz and Blues), Vancouver, Victoria, Quebec, Edmonton, Saskatoon, and Fredericton. Her international festival appearances include two visits to The Jamaica Jazz and Blues Festival, several European festivals including the North Sea Jazz Festival and the Montreux Jazz Festival as well as the Ginza International Jazz Festival in Japan at Kabuki-za.

On February 8, 2008, Yanofsky's 14th birthday, she kicked off a multi-city tour with Marvin Hamlisch at Carnegie Hall. In November 2008, she made her Canadian orchestral debut with the Edmonton Symphony Orchestra, and has gone on to sing with the Vancouver Symphony, the Edmonton Symphony and the Calgary Philharmonic.

With Herbie Hancock on piano, Yanofsky sang "On A Clear Day You Can See Forever" at the 2011 MusiCares Person of the Year awards honouring Barbra Streisand.

In 2008, Yanofsky received the Outstanding Youth in Philanthropy award from the Quebec Chapter of The Association of Fundraising Professionals. In the course of her career, she has helped raise over $10 million for local, national and international charities. She is currently associated with The Montreal Children's Hospital, The Children's Wish Foundation, and MusiCounts. She has also lent her voice to oneXone, Leave Out Violence Everywhere (L.O.V.E.), and ORT.[8]

Yanofsky sang a solo part in the remake of K'naan's song "Wavin' Flag" performed by Young Artists for Haiti. This song was certified platinum for digital downloads in April 2010,[4] and all of the proceeds from the single went to charities.

In October 2010, Yanofsky was awarded the first ever Allan Slaight Award by Canada's Walk of Fame.[9] This award is presented annually to a young Canadian who is making a positive impact in the fields of music, film, literature, visual or performing arts, sports, innovation or philanthropy.[9]

In June 2012, Yanofsky created the Nikki Yanofsky/Audio-Technica Scholarships at McGill University in Montreal. The funding was derived from an honorarium she had received for her performance at the 50th anniversary of Audio-Technica, a professional audio equipment company.

Yanofsky was born and raised in a "close-knit Jewish family"[10] in Montreal.[11] Her parents are Elyssa (née Rosenthal) and Richard Yanofsky.[10][12] She graduated from St. George's School of Montreal.[11]

Yanofsky was awarded an honorary doctorate from Concordia University at their spring 2017 convocation.

This article uses material from the article Nikki Yanofsky from the free encyclopedia Wikipedia and it is licensed under the GNU Free Documentation License.

For You Giovanni Russo & The Rubber Soul
Update Required To play the media you will need to either update your browser to a recent version or update your Flash plugin.