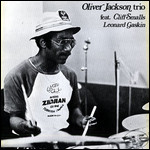 Jackson played in Detroit in the 1940s with Thad Jones, Tommy Flanagan, and Wardell Gray, and had a variety show with Eddie Locke called Bop & Locke. After working with Yusef Lateef from 195456 he moved to New York, where he played regularly at the Metropole in 195758. Following this he worked with Teddy Wilson, Charlie Shavers (195961), Buck Clayton, Benny Goodman (1962), Lionel Hampton (196264), Kenny Burrell, Earl Hines (196470 intermittently) and the JPJ Quartet with Budd Johnson. Later in life he played with Sy Oliver (197580), Oscar Peterson, and George Wein's Newport All-Stars. As a bandleader, Jackson led a 1961 date in Switzerland and recorded at least five albums for Black & Blue Records between 1977 and 1984.

His brother, bassist Ali Jackson, performed with him both at the beginning and towards the end of their careers.

Jackson died from heart failure at the age of 61.

This article uses material from the article Oliver Jackson from the free encyclopedia Wikipedia and it is licensed under the GNU Free Documentation License.

I'm Walkin' Irene Reid
Update Required To play the media you will need to either update your browser to a recent version or update your Flash plugin.