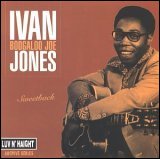 Ivan Joseph Jones, also known as "Boogaloo Joe", (born November 1, 1940) is a jazz guitarist.[1][2] He made his solo debut as "Joe Jones" on Prestige Records in 1967, but earned the name "Boogaloo Joe" following a 1969 record of that title. The nickname was meant to distinguish him from the other people with similar names in the music business, such as R&B singer Joe Jones, jazz drummers "Papa Jo" Jones and Philly Joe Jones, and the Joe Jones of the Fluxus movement. Later, he'd turn to billing himself as Ivan "Boogaloo Joe" Jones.

Jones recorded several albums in a soul-jazz vein for Prestige in the period from 1966 to 1978. In addition to leading his own group for recording purposes, Ivan Jones recorded with Richard 'Groove' Holmes, Houston Person, Harold Mabern, Wild Bill Davis and, most notably, Willis Jackson. Rusty Bryant, Charles Earland, and Bernard "Pretty" Purdie are among the sidemen also featured on Boogaloo's albums.

His sound and style clearly derived from the blues. But it was a solid understanding of rock that Jones brought to his style of jazz. He was influenced most by Tal Farlow and Billy Butler, but gravitated toward the rhythm and blues jazz Butler was popularizing with organist Bill Doggett's popular group.

While jazz went through some drastic changes during the dozen years of his recording career, Jones sound and style stayed remarkably consistent. His twangy tone coupled catchy chordal vamps with astonishing rapid-fire single-note playing. He could handle familiar pop covers ("Light My Fire," "Have You Never Been Mellow") and ballads. But he really excelled in the jazz-funk groove and proved himself a first-rate blues player.

Jones has lived in South New Jersey most of his life and mostly worked in and around the Atlantic City area with chitlin-circuit heroes like Wild Bill Davis, Willis Jackson and Charlie Ventura. Jones, who never won the notice of critics or great support from fans during his career, is finding new life on CD.

This article uses material from the article Ivan "Boogaloo Joe" Jones from the free encyclopedia Wikipedia and it is licensed under the GNU Free Documentation License.