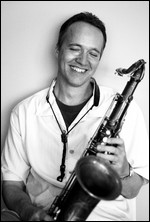 Ted Nash (born December 28, 1960)[1] is a jazz-composer and saxophonist, not to be confused with his uncle of the same name, who was also a saxophonist and first-call Hollywood studio musician.[2]

Best known for his associations with the Jazz at Lincoln Center Orchestra directed by Wynton Marsalis, the Jazz Composers Collective, and his own inventive groups, composer and multi- instrumentalist Ted Nash enjoys an extraordinary career as a performer, conductor, composer, arranger, and educator.

His albums are Conception, Rhyme and Reason, Still Evolved, In The Loop.

He has written pieces such as Portrait in Seven Shades, a musical piece dedicated to the representation of seven different artists, each in their own movement. The artists were, in order of representation, Claude Monet, Salvador Dalí, Henri Matisse, Pablo Picasso, Vincent van Gogh, Marc Chagall, and Jackson Pollock. It debuted on Thursday, February 22, 2007 at the Rose Theater in the Time Warner Center in New York City and the LP, released in 2010, was nominated for a Grammy.

This article uses material from the article Ted Nash (saxophonist, born 1960) from the free encyclopedia Wikipedia and it is licensed under the GNU Free Documentation License.