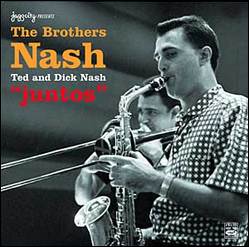 Theodore Malcolm "Ted" Nash (October 31, 1922 - May 12, 2011[1]) was a noted jazz and studio musician who played saxophone, flute and clarinet and was a first-call session musician in the Hollywood recording studios for many years. He was the featured alto sax soloist on almost all of Henry Mancini's movie and television soundtrack projects beginning in the late 1950s.

Ted was born in the Boston suburb of Somerville, Massachusetts. His original goal was to become a classical flutist but he began playing saxophone in his early teens. His professional career began when he went on the road with a succession of dance bands finally landing the solo tenor chair with the Les Brown band in 1944 where he rapidly made a name for himself. His distinctive tenor solos are the high points of many of the old Les Brown records.

Ted's playing was notable for his mastery of the extreme altissimo register of the saxophone. He was the author of "Ted Nash's Studies in High Harmonics for Tenor and Alto Saxophone" first published in 1946 and still in print.

In the late 1940s, after getting married, Ted settled in the Los Angeles area and thanks to his versatility quickly became an essential part of the thriving Hollywood movie and television recording industry. In 1956 he recorded with Paul Weston's orchestra the hit album "Day By Day," with vocals by his former colleague and close friend, Doris Day.

Ted's brother, trombonist Dick Nash, is the father of New York based saxophonist Ted Nash who has regularly performed with "The Lincoln Center Jazz Orchestra."

"The Brothers Go to Mother's", from "Peter Gunn" was composed by Mancini as a feature for Ted and Dick.

This article uses material from the article Ted Nash (saxophonist, born 1922) from the free encyclopedia Wikipedia and it is licensed under the GNU Free Documentation License.

Funk In A Deep Freeze John Bunch
Update Required To play the media you will need to either update your browser to a recent version or update your Flash plugin.