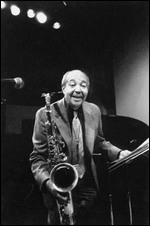 Harold de Vance Land (December 18, 1928 – July 27, 2001)[1] was an American hard bop and post-bop tenor saxophonist. Land developed his hard bop playing with the Max Roach/Clifford Brown band into a personal, modern style; often rivalling Clifford Brown's instrumental ability with his own inventive and whimsical solos. His tone was strong and emotional, yet hinted at a certain introspective fragility.[2]

Land was born in Houston and grew up in San Diego. He started playing at the age of 16. He made his first recording as the leader of the Harold Land All-Stars, for Savoy Records in 1949. In 1954 he joined the Clifford Brown/Max Roach Quintet, with whom he was at the forefront of the hard-bop/bebop movement.[3] Because of family problems he moved to Los Angeles in 1955. There he played with Curtis Counce, led his own groups, and co-led groups with Bobby Hutcherson, Blue Mitchell, and Red Mitchell. From the 1970s onwards his style showed the influence of John Coltrane.

In the early 1980s through to the early 1990s he worked regularly with the Timeless All Stars, a group sponsored by the Timeless jazz record label. The group consisted of Land on tenor, Cedar Walton on piano, Buster Williams on bass, Billy Higgins on drums, Curtis Fuller on trombone and Bobby Hutcherson on vibes. Land also toured with his own band during this time, often including his son, Harold Land Jr., on piano and usually featuring Bobby Hutcherson and Billy Higgins as well. During these years he played regularly at Hop Singhs in Marina Del Rey in the L.A area and the Keystone Korner in San Francisco.[3]

The progressive rock band Yes included a song "Harold Land" on their eponymous debut album in 1969. In a news/blog post on 20 September 2010, Bill Bruford commented about the song - "Harold Land was a hard-bop tenor saxophone player, dead now, but quite why we named a song after him I can’t remember."[4]

Land had an inimitably dark tone within the hard-bop and modal jazz paradigms. Over time this would contrast more and more with the brighter tonalities of more Coltrane-influenced saxophonists, although Land started to implement Coltrane's musical innovations. Land's "dire, brooding [tenor saxophone] sound began somewhere between rhythm and blues and Coleman Hawkins, and after the early 1960s owed more and more to John Coltrane's harmonies, phrasing and experiments with modalism."[5]

With the Timeless All Stars

This article uses material from the article Harold Land from the free encyclopedia Wikipedia and it is licensed under the GNU Free Documentation License.