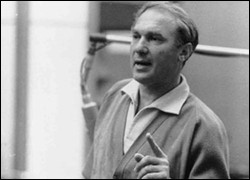 Granz was a fundamental figure in American jazz, especially from about 1947 to 1960. He was the founder of five record labels: Clef, Norgran, Down Home, Verve and Pablo.

Later known as JATP, the ever-changing group recorded and toured extensively, with Granz producing some of the first live jam session recordings to be distributed to a wide market.

After several JATP concerts in Los Angeles in 1944 and 1945, Granz began producing JATP concert tours, from late fall of 1945 to 1957 in USA and Canada, and from 1952 in Europe. They featured swing and bop musicians and were among the first high-profile performances to feature racially integrated bands. Granz actually cancelled some bookings rather than have the musicians perform for segregated audiences. He recorded many of the JATP concerts, and from 1945 to 1947 sold/leased the recordings to Asch/Disc/Stinson Records (record producer Moses Asch's labels).

in 1948 Granz signed an agreement with Mercury Records for the promotion and the distribution of the JATP recordings and other recordings. After the agreement expired in 1953 he issued the JATP recordings and other recordings on Clef Records (founded 1946) and Norgran Records (founded 1953). Down Home Records was intended for traditional jazz works. Jazz at the Philharmonic ceased touring the United States and Canada, after the JATP concerts in the fall of 1957, apart from a North American Tour in 1967.

Granz saw to it that his musicians were well paid. In the segregated society of the 1940s, he insisted on equal pay and accommodation for white and black musicians. He refused to take his hugely popular concerts to places which were segregated, even if he had to cancel concerts, thereby sacrificing considerable sums of money.[1]

It was in 1956 that the popular singer Ella Fitzgerald finally joined Norman Granz's label. Granz had been her manager for some time, and unified his activities under the common label of Verve Records. Granz became Fitzgerald's manager, and remained so until the end of her career. Fitzgerald's memorable series of eight Songbooks, together with the duet series (notably Armstrong-Peterson, Fitzgerald-Basie, Fitzgerald-Pass and Getz-Peterson) achieved wide popularity and brought acclaim to the label and to the artists. Granz was also the manager of Oscar Peterson, another lifelong friend. In 1959, Norman Granz moved to Switzerland. In December 1960, Verve Records was sold to Metro-Goldwyn-Mayer.

Norman Granz is remembered also for his anti-racist position and for the battles he consequently fought for his artists (many, perhaps the majority, of whom were black), in times and places where skin color was the cause of open discrimination. In 1955, in Houston, Texas, he personally removed the labels "White" and "Negro" that would have separated the audience in the auditorium where two concerts were to be performed by (among others) Ella Fitzgerald and Dizzy Gillespie; between the two shows they were found playing cards in the dressing room and arrested by local police, but after some nervous negotiations allowed to perform the second show, and only formally released after that. Granz nevertheless insisted on fighting the charges, which cost him the immense sum of $2,000.[1] Oscar Peterson recounted how Granz once continued to insist that white cabdrivers take his black artists as customers even while a policeman was pointing a loaded pistol at his stomach from close range (Granz won). Granz also was among the first to pay white and black artists the same salary and to give them equal treatment even in minor details, like dressing rooms.

Beloved by his artists, not only because he paid more than average, he had three main goals, as he repeatedly and frankly declared: to fight against racism, to give listeners a good product, and to earn money from good music.

A detailed look at Norman, his career and his legacy can be found in Tad Hershorn's 2011 book "Norman Granz-The Man Who Used Jazz for Justice".

This article uses material from the article Norman Granz from the free encyclopedia Wikipedia and it is licensed under the GNU Free Documentation License.

I Wish I Knew Harper Brothers
Update Required To play the media you will need to either update your browser to a recent version or update your Flash plugin.