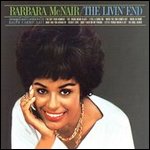 Barbara McNair (March 4, 1934 February 4, 2007) was an American singer and actress. Born Barbara Jean McNair in Chicago, Illinois and raised in Racine, Wisconsin,[1] McNair studied music at the American Conservatory of Music in Chicago. Her big break came with a win on Arthur Godfrey's TV show Talent Scouts, which led to bookings at The Purple Onion and the Cocoanut Grove.

She soon became one of the country's most popular headliners and a guest on such television variety shows as The Steve Allen Show, Hullabaloo, The Bell Telephone Hour, and The Hollywood Palace, while recording for the Coral, Signature, Motown, and TEC Recording Studios labels. Among her hits were "You're Gonna Love My Baby" and "Bobby". In the early 1960s, McNair made several musical shorts for Scopitone, a franchise of coin-operated machines that showed what were the forerunners of today's music videos.

In 1967 McNair traveled with Bob Hope to Southeast Asia to perform for U.S. troops during the Vietnam War along with Raquel Welch, Elaine Dunn, Phil Crosby and 1967 Miss World Madeleine Hartog Bell. She said on stage that Hope talked her into going on the tour by promising her she'd get to meet royalty. "He let me walk his dog Prince," she joked. Among the songs she sang was an slowed-down, emotional version of "For Once in My Life."

McNair's acting career began on television, guesting on series such as Dr. Kildare, The Eleventh Hour, I Spy, Mission: Impossible, Hogan's Heroes and McMillan and Wife. McNair posed nude for Playboy in the October 1968 issue. She caught the attention of the movie-going public with her much-publicized nude sequences in the gritty crime drama If He Hollers Let Him Go (1968) opposite Raymond St. Jacques, then donned a nun's habit alongside Mary Tyler Moore for Change of Habit (1969), Elvis Presley's last feature film. She portrayed Sidney Poitier's wife in They Call Me MISTER Tibbs! (1970) and its sequel, The Organization (1971), and George Jefferson's deranged ex-girlfriend Yvonne in The Jeffersons (1984).

McNair starred in her own 1969 television variety series The Barbara McNair Show, one of the first black women to host her own musical variety show. The show, which was produced in Canada by CTV (at CFTO/Toronto) lasted three seasons in first-run syndication in the United States until 1972, at the time she married Frederick Andrew Manzie (Rick Manzie), Mr. Manzie managed Barbara McNair and produced the show with Burt Rosen, they formed ABR Entertainment and the rights to the show are owned by the Manzie Family. The show starred A-list guests like Tony Bennett, Sonny and Cher, The Righteous Brothers, Johnny Mathis, Freda Payne, and many more entertainers that became superstars.

On December 15, 1976, her husband, Rick Manzie, was murdered,[2] in their Las Vegas Bruce Street Mansion and Mafia boss-turned-FBI-informant Jimmy Fratianno later claimed in his book The Last Mafioso that Manzie had been a Mafia associate who tried to put a contract on the life of a mob-associated tax attorney with whom he had a legal dispute. "Many believe the murder was a mafia hit, although this has never been officially proven".[3] The ensuing publicity did little to help McNair's career.

Her recordings include Livin' End, "The Real Barbara McNair", More Today Than Yesterday", Broadway Show Stoppers", "A Movie Soundtrack If He Hollars, Let Him Go", I Enjoy Being a Girl, and The Ultimate Motown Collection, a two-CD set with 48 tracks that include her two albums for the label plus a non-album single and B-side and an entire LP that never was released.

Into her seventies, McNair resided in the Los Angeles area, playing tennis and skiing to keep in shape on a regular basis and touring on occasion. She died on February 4, 2007, of throat cancer, in Los Angeles, survived by her husband Charles Blecka, sister Jaquline Gaither, niece Angela Rosenow, and the nephew of her late husband Frederick Manzie, John Thomas and his family.

This article uses material from the article Barbara McNair from the free encyclopedia Wikipedia and it is licensed under the GNU Free Documentation License.