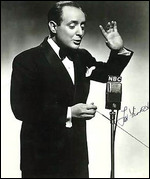 Theodore Salvatore Fiorito (December 20, 1900 – July 22, 1971),[1] known professionally as Ted Fio Rito, was an American composer, orchestra leader, and keyboardist, on both the piano and the Hammond organ, who was popular on national radio broadcasts in the 1920s and 1930s. His name is sometimes given as Ted Fiorito or Ted FioRito.

He was born Teodorico Salvatore Fiorito in Newark, New Jersey to an Italian immigrant couple, tailor Louis (Luigi) Fiorito and Eugenia Cantalupo Fiorito, when they were both 21 years old; and he was delivered by a midwife at their 293 15th Avenue residence. Ted Fiorito attended Barringer High School in Newark.[2]

He was still in his teens when he landed a job in 1919 as a pianist at Columbia's New York City recording studio, working with the Harry Yerkes bands—the Yerkes Novelty Five, Yerkes' Jazarimba Orchestra and The Happy Six. His earliest compositions were recorded by the Yerkes groups and Art Highman's band. Fio Rito had numerous hit recordings, notably his two number one hits, "My Little Grass Shack in Kealakekua, Hawaii" (1934) and "I'll String Along with You" (1934).

He moved to Chicago, Illinois in 1921 to join Dan Russo's band, and the following year he was the co-leader of Russo and Fio Rito's Oriole Orchestra.[3] When Russo and Fio Rito opened at Detroit, Michigan's Oriole Terrace, their band was renamed the Oriole Terrace Orchestra. Their first recordings (May 1922) included Fio Rito's "Soothing." He did "Sleep" and other tunes for the AMPICO Reproducing Piano.

The band returned to Chicago for a booking at the Edgewater Beach Hotel, where they did their first radio remote broadcast on March 29, 1924. The band had a four-year engagement at the hotel.[3]

In August 1925, the Russo-Fio Rito orchestra opened Chicago's new Uptown Theatre. They opened the famous Aragon Ballroom in July 1926, doing radio remotes nationally from both the Aragon and the Trianon Ballrooms. In 1927, he had a radio program on KTHS in Hot Springs, Arkansas.[5] Dan Russo left the band in 1928, and Fio Rito took over as leader, touring the midwest with engagements in St. Louis, Kansas City and Cincinnati.

In August 1929, the band's first recording without Russo featured Ted Lewis on clarinet and vocal. Billed as Ted Fio Rito and His Edgewater Beach Hotel Orchestra, they headed for San Francisco to fill in for the Anson Weeks orchestra at the Mark Hopkins Hotel.

Fio Rito reached a national audience through syndicated and network radio programs. In Chicago, the band was heard on the Brunswick Brevities program, and they were the featured orchestra on NBC's Skelly Gasoline Show in New York. They broadcast on many 1930s radio programs, including The Old Gold Hour, Hollywood Hotel, The Al Jolson Show, Frigidaire Frolics and Clara, Lu, and Em.

During the 1940s, the band’s popularity diminished, but Fio Rito continued to perform in Chicago and Arizona. He played in Las Vegas during the 1960s. In his last years, he led a small combo at venues throughout California and Nevada until his death in Scottsdale, Arizona from a heart attack. He is buried in the San Fernando Mission Cemetery in the Mission Hills community of northern Los Angeles.

Details of his chart successes are given below.[6]

Other songs and recordings

This article uses material from the article Ted Fio Rito from the free encyclopedia Wikipedia and it is licensed under the GNU Free Documentation License.

Brahmsymphony Gregor Loepfe Trio
Update Required To play the media you will need to either update your browser to a recent version or update your Flash plugin.