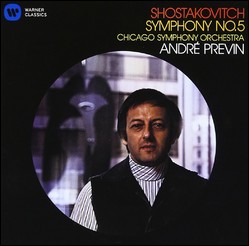 André George Previn, KBE (/ˈprɛvɪn/; born Andreas Ludwig Priwin; April 6, 1929)[1] is a German-American pianist, conductor, and composer. Previn is the winner of four Academy Awards for his film work and ten Grammy Awards for his recordings (and one more for his Lifetime Achievement).

Previn was born in Berlin, Germany, the son of Charlotte (née Epstein) and Jack Previn (Jakob Priwin), who was a lawyer, judge, and music teacher.[2] He is said to be "a distant relative of" the composer Gustav Mahler.[3] However, in a pre-concert public interview at Lincoln Center, in May 2012, Previn laughed at the suggestion that he is related to Mahler. The year of his birth is uncertain. Whereas most published reports give 1929,[1] Previn himself has stated that 1930 is his birth year.[4]

In 1939, his family, being Jewish, left Nazi Germany and moved to Los Angeles, where his great-uncle, Charles Previn, was music director of Universal Studios. André grew up in Los Angeles and became a naturalized citizen of the United States in 1943. At Previn's 1946 graduation from Beverly Hills High School he played a musical duet with Richard M. Sherman; Previn played the piano, accompanying Sherman (who played flute). He first came to prominence by arranging and composing Hollywood film scores in 1948. Coincidentally, both composers won 1964 Oscars for different films, both winning in musical categories.

In 1951 and 1952, while stationed at the Presidio of San Francisco during his military service, Previn took private conducting lessons from Pierre Monteux, which he valued highly.[5]

Work as a conductor

In 1985, he became music director of the Los Angeles Philharmonic. Although Previn's tenure with the orchestra was deemed satisfactory from a professional perspective, other conductors, including Kurt Sanderling, Simon Rattle, and Esa-Pekka Salonen, did a better job at selling out concerts. Previn clashed frequently with Ernest Fleischmann (the orchestra's Executive VP and General Manager), most notably when Fleischmann failed to consult him before naming Salonen as Principal Guest Conductor of the orchestra, complete with a tour of Japan. Because of Previn's objections, Salonen's title and Japanese tour were withdrawn; however, shortly thereafter, in April 1989, Previn resigned. Four months later, Salonen was named Music Director Designate of the Los Angeles Philharmonic, officially taking the post of Music Director in October 1992.[7]

Most films are still available as Videos/DVDs or/and as soundtrack records, at least antiquarian. Some soundtracks have been reissued in recent years like the ones from Elmer Gantry, Four Horsemen of the Apocalypse or Inside Daisy Clover Dead Ringer.

Previn made dozens of jazz recordings as leader and sideman, primarily during two periods of his career: from 1945 to 1967, and then again from 1989 to 2001, with just a handful of recordings in between and afterward (while he focused his career on conducting/recording classical music, and later on composing contemporary art music). Previn also did several crossover recordings with classical singers like Eileen Farrell, Leontyne Price or Kiri Te Kanawa, too, as well as several Easy-Listening records with piano and orchestra in the 1960s (beginning with Like Young. Secret Songs for Young Lovers, 1959. with David Rose and His Orchestra).

Like Oscar Peterson, whom Previn admires a lot,[8] and Bill Evans – or more recently Keith Jarrett, Brad Mehldau or Esbjörn Svensson – Previn has worked a lot as a trio pianist (usually with bass and drums). Following his performance on Shelly Manne's huge hit record Modern Jazz Performances of Songs from My Fair Lady in 1956, Previn released several albums of jazz interpretations of songs from broadway musicals as well as several solo piano recordings focussed on the songbooks of popular composers (André Previn Plays Songs by Vernon Duke, 1958; André Previn Plays Songs by Harold Arlen, 1960; Ballads. Solo Jazz Standards, 1996; Alone: Ballads for Solo Piano, 2007), the late recording of songs by Harold Arlen with singer Sylvia McNair and bass player David Finck (Come Rain or Shine. The Harold Arlen Songbook, 1996), and his TV shows with Oscar Peterson (1974)[9] – which Marlon Brando simply called "one of the greatest hours I ever saw on television"[10] – and Ella Fitzgerald (1979)[11] respectively.

Jazz critic and historian Ted Gioia wrote in his book about West Coast Jazz, the scene to which Previn belonged:

[His] projects varied greatly in terms of quality and jazz content, but at his best Previn could be a persuasive, moving jazz musician. [...] Despite his deep roots in symphonic music, Previn largely steered clear of Third Stream classicism in his jazz work, aiming more at an earthy, hard-swinging piano style at times reminiscent of Horace Silver. Long before his eventual retreat from his jazz work, Previn had become something of a popularizer of jazz rather than a serious practitioner of the music. At his best, however, his music reflected a strong indigenous feel for the jazz idiom.[12]

He has the flow, you know, which a lot of guys don't have and won't ever get. Yeah. I heard him play and I knew. A lot of guys, they have the technique, the harmonic sense. They've got the perfect coordination. And, yeah, all that's necessary. But you need something more, you know? Even if you only make an oooooooo, like that, you got to have the flow.[13]

With The Mitchells: Red Mitchell, Whitey Mitchell and Blue Mitchell

As in Jazz, Previn, the classical pianist, worked most of the time as a trio pianist (with violin and cello) in classical chamber music. Accordingly, most of his recordings as pianist are in this genre.

Previn has also enjoyed a long relationship with television, featuring in Meet André Previn (1969) on London Weekend Television, the Morecambe and Wise Christmas Show in 1971 and 1972 (BBC), André Previn's Music Night (conducting the London Symphony Orchestra - three programmes in 1973, others in 1975 and 1976), television interviews with other artists, appearances on Call My Bluff, and participation in documentaries about popular music and jazz during the 1970s and 1980s.[14] Previn became known to a broad public through his television work. In the United Kingdom he worked on TV with the London Symphony Orchestra. In the United States the TV show "Previn and the Pittsburgh" (1977) featured him in collaboration with the Pittsburgh Symphony Orchestra.

Previn is particularly remembered in Britain for his performance as "Mr. Andrew Preview" (or "Privet") on the Morecambe and Wise Christmas Show in 1971, which involved his conducting a performance of Edvard Grieg's Piano Concerto with Eric Morecambe as the comically inept soloist (being swindled into it by being told that Yehudi Menuhin would be his solo violinist). "Preview" then remarks that "I'll go fetch my baton. It's in Chicago." This comic ad-lib made Morecambe immediately realise the sketch would be a success.[15] Later in the sketch "Mr Preview" accuses Eric Morecambe of playing all the wrong notes; Eric retorts that he has been playing "all the right notes, but not necessarily in the right order".[16] Because of other commitments the only time available for Previn to learn his part in the show was during a transatlantic flight but the talent he showed for comedy won high praise from his co-performers. He made a second appearance in their eighth series. In the sketch, he is tricked into visiting the pair again, and they suggest that if he works with them again, he could receive a knighthood. He conducted a 1920s-style dance band as the pair sang, then joined them at the end of the episode in singing Bring Me Sunshine. Previn also appeared in the 1972 Christmas Show, bemoaning the apparent consequences of his 1971 appearance: the only conducting work he now gets is on a London bus.

At a concert with the Grieg Concerto in Britain afterwards, Previn had to pause the playing to allow the audience time to stop giggling as they remembered the sketch. Previn himself notes that people in Britain still recall the sketch years later: "Taxi drivers still call me Mr Preview".[1]

Previn has been married five times. His first marriage, in 1952, was to jazz singer Betty Bennett, with whom he had two daughters, Claudia Previn[17] Stasny and Alicia Previn[18] (a violinist for the Irish band In Tua Nua and a founding member of the Young Dubliners). Previn divorced Bennett in 1957, a few months before she gave birth to Alicia.[19]

In 1959, he married Dory Langan.[20] A singer-songwriter,[21] Dory became widely known as a lyricist with whom Previn collaborated on several Academy Award-nominated film scores during their marriage.[20] After Previn divorced her in 1969 during her hospitalization for a mental breakdown, Dory resumed her career as a singer-songwriter with On My Way to Where (1970), a critically acclaimed album whose confessional lyrics were described as "searingly honest", and chronicled both her mental health struggles and the infidelity that she alleged had at once precipitated the end of her marriage to Previn and exacerbated her intermittent mental illness.[20][22][23][24] In 2013, jazz singer Kate Dimbleby and pianist Naadia Sheriff revisited Dory Previn's musical reflections on her marriage to André Previn in the London cabaret show, Beware Of Young Girls: The Dory Previn Story.[25][26]

Previn's third marriage, in 1970, was to Mia Farrow. Before their divorce in 1979, Previn and Farrow had three biological children together—twins Matthew and Sascha, born in 1970, and Fletcher, born in 1974. They then adopted Vietnamese infants Lark Song and Summer "Daisy" Song (born October 6, 1974), followed by Soon-Yi Previn, a Korean child whose age a physician's bone scan placed between 6 and 8 years old and whose unknown birth date her adoptive parents estimated as October 8, 1970.[27] Lark died on Christmas Day 2008.[28] In the aftermath of the scandal involving Soon-Yi and Mia Farrow's partner Woody Allen,[27] Previn said of Soon-Yi, "She does not exist."[29]

Previn's longest marriage was his fourth. In January 1982 he married Heather Sneddon. With Heather he had two children, Li-An Mary, adopted 1982 and Lukas Alexander, born 1983. Previn wrote a brief memoir of his early years in Hollywood, No Minor Chords, which was published in 1991, edited by Jacqueline Kennedy Onassis and dedicated to Heather. This marriage ended after 20 years in 2002.

His fifth marriage, in 2002, was to the German violinist Anne-Sophie Mutter, for whom in the previous year he had composed a violin concerto. They announced their divorce in August 2006,[30] but continue to work together in concerts.[31][32]

Previn has received a total of thirteen Academy Award nominations, winning in 1958, 1959, 1963 and 1964. He is one of few composers to accomplish the feat of winning back-to-back Oscars, and one of only two to do so on two occasions (the other being Alfred Newman). In 1970 he was nominated for a Tony Award as part of Coco's nomination for Best Musical. In 1977 he became an Honorary Member of the Royal Academy of Music.[33] The 1977 television show Previn and the Pittsburgh was nominated for three Emmy awards. Previn was appointed an honorary Knight Commander of the Order of the British Empire in 1996.[34] (Not being a citizen of a Commonwealth realm, he may use the post-nominal letters KBE but is not called "Sir André".) Previn received the Kennedy Center Honors in 1998 in recognition of his contributions to classical music and opera in the United States. In 2005 he was awarded the international Glenn Gould Prize and in 2008 won Gramophone magazine's Lifetime Achievement Award for his work in classical, film, and jazz music.[35] In 2010, the Recording Academy honored Previn with a Lifetime Achievement Grammy.

Best Performance by an Orchestra

This article uses material from the article André Previn from the free encyclopedia Wikipedia and it is licensed under the GNU Free Documentation License.

Blues Trek Jazz Coop
Update Required To play the media you will need to either update your browser to a recent version or update your Flash plugin.