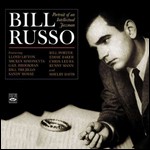 William Russo, better known as Bill Russo (June 25, 1928 January 11, 2003), was an American jazz musician. He is considered one of the greatest jazz composers and arrangers.[1]

A former student of the jazz pianist Lennie Tristano, Russo wrote ground-breaking orchestral scores for the Stan Kenton Orchestra in the 1950s, including 23 Degrees N 82 Degrees W, Frank Speaking, and Portrait of a Count. One of the more famous works he wrote for the Kenton Orchestra is Halls Of Brass, specially composed for the brass section, without woodwinds or percussion. The section recording this piece, featured such jazz artists as Buddy Childers, Maynard Ferguson and Milt Bernhart, was much-respected by symphony brass musicians.

At the beginning of the 1960s Russo moved to England, where he founded the London Jazz Orchestra. He was a contributor to the Third Stream movement that sought to close the gap between jazz and classical music. He returned to his native city of Chicago in 1965, where he founded Columbia College's music department and became the director of its Center for New Music, as well as the college's first full-time faculty member. He was also the Director of Orchestral Studies at Scuola Europea dOrchestra Jazz in Palermo, Italy.

Besides writing for jazz ensembles, Russo also composed classical music, including symphonies, and choral works, as well as a number of works for the theater, often mixing elements of different genres. His 1959 Symphony No. 2 in C "TITANS" received a Koussevitsky award, and marked his entrance into the classical-music world. It was performed by the New York Philharmonic that year with Leonard Bernstein conducting (Bernstein had commissioned the piece) and trumpeter Maynard Ferguson appearing as soloist.

Russo's music-theater works included a rock cantata, The Civil War (1968), based on poems by Paul Horgan. A politically charged multimedia piece for soloist, chorus, dancers, and rock band, The Civil War paralleled the American Civil War and the martyrdom of President Lincoln with the turbulent civil rights and antiwar movements of the 1960s and the murders of Martin Luther King Jr. and Robert F. Kennedy. Russo followed The Civil War with other rock-based multimedia music-theater works including Liberation, Joan of Arc, Aesop's Fables, The Bacchae, and Song of Songs. These and other works were performed by the Chicago Free Theater, which Russo founded and directed. One of the seminal troupes of the off-Loop theater movement that blossomed in Chicago in the late 1960s, the Free Theater spawned sister companies in Baltimore and San Francisco.

In 1969, Russo teamed up with director Paul Sills, who was the founding director of the Second City, and community activist Rev. Jim Shiflett to establish the Body Politic Theatre, one of the first professional off-Loop theaters in Chicago. Russo's other works for the theater include the operas John Hooton (1962), The Island (1963), Land of Milk and Honey (1964), Antigone (1967), The Shepherds' Christmas, The Pay-Off (198384), The Sacrifice, and Dubrovsky (1988), as well as a double bill of operas inspired by commedia dell'arte, Isabella's Fortune and Pedrolino's Revenge (performed off-Broadway in 1974), and a musical fairy tale for children, The Golden Bird, for singers, narrator, dancers, and symphony orchestra (premiered in 1984 under the auspices of the Chicago Symphony Orchestra). His collaborators on these and other works for the theater included Adrian Mitchell, Arnold Weinstein, Jon Swan, Alice Albright Hoge, Irma Routen, Naomi Lazard, Robert Perrey, Donald T. Sanders, Albert Williams, Jonathan Abarbanel and Denise DeClue. Russo also composed art songs set to poetry by Edna St. Vincent Millay, W. H. Auden and Gertrude Stein, as well as scores for dance and film.

As part of his work with Columbia College, he started the Chicago Jazz Ensemble (CJE),[2] which was dedicated to preserving and expanding jazz. However a few years later this ensemble was disbanded, but was fully reborn in 1991 and continues to the present; Russo's successor as the CJE's artistic director was trumpeter Jon Faddis. Russo appeared with the band the week prior to his death. After a bout with cancer, Russo retired as chair of the Columbia College Music Department in 2002. He died in 2003.

Russo was married three times, to:

He also had a daughter, Whitney C. Schildgen, from an extramarital relationship.[4]

In 1990, he received a Lifetime Achievement award from the National Academy of Recording Arts and Sciences, the organization that presents the Grammy Awards.

This article uses material from the article William Russo (musician) from the free encyclopedia Wikipedia and it is licensed under the GNU Free Documentation License.

An Affair To Remember Cal Collins Quartet
Update Required To play the media you will need to either update your browser to a recent version or update your Flash plugin.