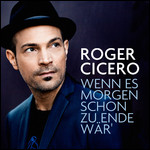 He made his first stage appearance at the age of eleven as a support act for Swiss singer Helen Vita and was first on television aged 16, alongside the RIAS-Tanzorchester, then under the direction of Horst Jankowski. Cicero joined the Hohner Conservatory in Trossingen when he was 18, where he received coaching in piano, guitar and singing. Between 1989 and 1992, he appeared alongside the Horst Jankowski Trio, the Eugen Cicero Trio (his father’s group) as well as with the Bundesjugendjazzorchester (German Youth Jazz Orchestra), then directed by Peter Herbolzheimer. From 1991 to 1996, he studied jazz singing at the Amsterdam Academy of Arts (Amsterdamse Hogeschool voor de Kunsten) at Hilversum. He was a guest singer with the groups Jazzkantine and Soulounge with whom he took part in the Montreux Jazz Festival. In 2003, he founded the Roger Cicero Quartet, as well as continuing to perform with his eleven-piece big band. His style is predominantly that of 1940s and 1950s swing music, combined with German lyrics.

In 2006, Cicero sang on jazz pianist Julia Hülsmann's album Good Morning Midnight and released his first solo album Männersachen. He worked alongside thirteen composers (predominantly Matthias Haß and Frank Ramond). Schieß mich doch zum Mond is the German version of Frank Sinatra’s Fly Me to the Moon. The covered track Zieh die Schuh aus (Take your shoes off), reached number 71 in the German singles chart. The album Männersachen made it to number three.

Cicero made his film debut in Hilde (2009) as musician Ricci Blum. Directed by Kai Wessel, the film is a biography of the German singer and actress Hildegard Knef, played by Heike Makatsch. Cicero also provided the singing and speaking voice of Prince Naveen in the German soundtrack for the 2009 Disney film The Princess and the Frog (German: Küss den Frosch).

He sang at a concert in honor of the Dalai Lama in August 2009 in Frankfurt.

Cicero and his Big Band headlined at the Montreux Jazz Festival in Switzerland on 12 July 2010. This performance introduced an English version of his song Murphy's Gesetz (Murphy’s Law), and That you and I feeling, a new version of his song Ich hab das Gefühl für dich verlor'n. The concert was released on DVD as Roger Cicero - Live at Montreux 2010.

In October 2010 Cicero published a book, Weggefährten: Meine Songs fürs Leben (Companions: My Songs for Life) in which he describes the history and personal meaning of songs by artists including the Beatles, Prince and Stevie Wonder. The book describes Cicero’s youth in West Berlin, his musical studies in the Netherlands, and a formative trip he made as a teenager with his father to his paternal family’s native Romania.

After appearing in promotional talks for Weggefährten at the Frankfurt Book Fair, Cicero toured with his pianist and musical director Lutz Krajenski. The Roger Cicero Solo programme featured the duo performing songs from their albums, including jazz numbers Cicero and Krajenski recorded as part of the group After Hours. Along with swing and jazz, they played rock and soul songs in English and German, and presented new arrangements of Every little thing she does is Magic,What’s Going On, Let’s Stay Together, and Prince’s Forever in My Life. In some songs Cicero played piano and guitar as well.

Cicero's song Für nichts auf dieser Welt (For nothing in this world), from his fourth album In diesem Moment was chosen by the German football association as the official fan song to support the German team for the Euro 2012 tournament. Cicero performed the song at a Germany-Israel friendly football match in Leipzig on 31 May 2012.

In December 2012, Cicero appeared along with the American actor and singer Robert Davi in the French/German Arte TV program Durch die Nacht mit.... The episode was shot in the Little Italy area of New York City and features conversation between Cicero and Davi and solos of Sinatra standards by both performers.

In 2014 he was one of the stars of the Vox television show "Sing meinen Song – Das Tauschkonzert" (Sing my song - the exchange concert) along with Xavier Naidoo, Sasha, Andreas Gabalier, Sandra Nasić and Gregor Meyle.[4]

Cicero released two albums in 2015. The Roger Cicero Jazz Experience features Cicero as part of a quartet, with three musicians from his big band: Maik Schott, piano, Hervé Jeanne, bass, and Matthias 'Maze' Meusel, drums and percussion. This seventh album was recorded following two years of concerts by the Jazz Experience, and features jazz renditions of songs by pop musicians such as Nick Drake, Paul Simon and James Taylor. During 2015, in addition to touring with his Jazz Experience concerts, Cicero also sang Frank Sinatra songs under the strapline Cicero sings Sinatra. His first live album captures two concerts in Hamburg, with Cicero and his thirteen strong Big Band playing Sinatra's songs, with guest appearances by Sasha, Xavier Naidoo, and Yvonne Catterfeld. The DVD includes a duet with Cicero and Paul Anka singing My Way.

Cicero appeared in advertisements and videos for the animal rights organization PETA and supported their campaign against the wearing of fur.

This article uses material from the article Roger Cicero from the free encyclopedia Wikipedia and it is licensed under the GNU Free Documentation License.