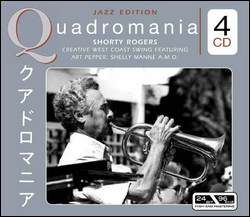 Milton "Shorty" Rogers (April 14, 1924 – November 7, 1994) was one of the principal creators of West Coast jazz. He played trumpet and flugelhorn and was in demand for his skills as an arranger.

Rogers worked first as a professional musician with Will Bradley and Red Norvo. From 1947 to 1949, he worked extensively with Woody Herman and in 1950 and 1951 he played with Stan Kenton.[1]

Rogers appeared on the Shelly Manne 10" LP The Three (1954, later reissued as part of The Three & The Two) along with Jimmy Giuffre. Much of the music he recorded with Giuffre showed his experimental side, resulting in an early form of avant-garde jazz. He also made notable recordings with Art Pepper and André Previn, among others.

From 1953 through 1962, Rogers recorded a series of albums for RCA Victor (later reissued on RCA's Bluebird label), as well as a series of albums for Atlantic Records with his own group, Shorty Rogers and His Giants, including Shorty Courts the Count (1954), The Swinging Mr. Rogers (1955), and Martians Come Back (1955), the album title alluding to the tune "Martians Go Home" which Rogers had composed and performed on The Swinging Mr. Rogers earlier the same year. These albums incorporated some of his more avant-garde music. To some extent they could be classified as "cool" jazz; but they also looked back to the "hot" style of Count Basie, whom Rogers always credited as a major inspiration.[2]

Credited with the composition of the music for UPA's Mr. Magoo cartoon Hotsy Footsy and Looney Tunes' Three Little Bops, Rogers eventually became better known for his skills as a composer and arranger than as a trumpeter.

In the film The Man with the Golden Arm (1955), starring Frank Sinatra, Eleanor Parker, Kim Novak, Arnold Stang and Darren McGavin, and directed by Otto Preminger, the film's jazz soundtrack was played by Shorty Rogers and His Giants with Shelly Manne.

Shorty Rogers and his Giants appear performing "Wig Alley" (a version of "Morpo") and the opening bars of "Manteca" in the club scene of the surreal film Dementia (aka Daughter of Horror, 1955) with Adrienne Barrett as The Gamin who is caught in a nightmarish maelstrom of deeds.

In the 1950s, when Igor Stravinsky began experimenting with dodecaphony, one of the twelve-tone techniques originally devised by Arnold Schoenberg, Stravinsky was impressed with Rogers's playing, which, as Robert Craft reports in his book Conversations with Stravinsky, influenced the composer's 1958 choral work Threni.

After the early 1960s, Rogers ceased performing on trumpet, and left the jazz scene for many years. Among other composing and arranging activities, he arranged a series of records for the Monkees (including "Daydream Believer") in the late 1960s, and in the 1970s wrote the jazzy background score to The Partridge Family during the television show's first season. He also contributed episode scores for the fourth season of Starsky & Hutch, and scored the reunion television movie The Return of Mod Squad (1979). In 1981, he arranged and conducted the soundtrack of the film Zoot Suit.

In 1982, he returned to performing on the trumpet in jazz ensembles, playing first with Britain's National Youth Jazz Orchestra and soon with Bud Shank and others. In the early 1990s, he was part of a Lighthouse All Stars group along with Shank, Bill Perkins, Bob Cooper, Conte Candoli, Claude Williamson, Monty Budwig, and John Guerin.

Rogers died of melanoma in Van Nuys, California, at the age of 70.[1]

With Herb Alpert & the Tijuana Brass

With Les Brown and His Band of Renown

With Bobbie Gentry and side to side with producer Kelly Gordon

This article uses material from the article Shorty Rogers from the free encyclopedia Wikipedia and it is licensed under the GNU Free Documentation License.