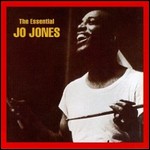 Jonathan David Samuel Jones (October 7, 1911 – September 3, 1985) was an American jazz drummer. A band leader and pioneer in jazz percussion, Jones anchored the Count Basie Orchestra rhythm section from 1934 to 1948. He was sometimes known as Papa Jo Jones to distinguish him from younger drummer Philly Joe Jones.

Born in Chicago, Illinois, Jones moved to Alabama, where he learned to play several instruments, including saxophone, piano, and drums. He worked as a drummer and tap-dancer at carnival shows until joining Walter Page's band, the Blue Devils in Oklahoma City in the late 1920s. He recorded with trumpeter Lloyd Hunter's Serenaders in 1931, and later joined pianist Count Basie's band in 1934. Jones, Basie, guitarist Freddie Green and bassist Walter Page were sometimes billed as an "All-American Rhythm section," an ideal team. Jones took a brief break for two years when he was in the military, but he remained with Basie until 1948. He participated in the Jazz at the Philharmonic concert series.

He was one of the first drummers to promote the use of brushes on drums and shifting the role of timekeeping from the bass drum to the hi-hat cymbal. Jones had a major influence on later drummers such as Buddy Rich, Kenny Clarke, Roy Haynes, Max Roach, and Louie Bellson. He also starred in several films, most notably the musical short Jammin' the Blues (1944).

Jones performed regularly in later years at the West End jazz club at 116th and Broadway in New York City. These performances were generally very well attended by other drummers such as Max Roach and Roy Haynes. In addition to his artistry on the drums, Jones was known for his irascible, combative temperament.

In contrast to drummer Gene Krupa's loud, insistent pounding of the bass drum on each beat, Jones often omitted bass drum playing altogether. Jones also continued a ride rhythm on hi-hat while it was continuously opening and closing instead of the common practice of striking it while it was closed. Jones's style influenced the modern jazz drummer's tendency to play timekeeping rhythms on a suspended cymbal that is now known as the ride cymbal.

In 1979, Jones was inducted into the Alabama Jazz Hall of Fame for his contribution to the Birmingham, Alabama musical heritage. Jones was the 1985 recipient of an American Jazz Masters fellowship awarded by the National Endowment for the Arts.

His autobiography (as told to Albert Murray), entitled Rifftide: The Life and Opinions of Papa Jo Jones and based on conversations between Jones and novelist Murray from 1977 to before Jones' death in 1985, was posthumously published in 2011 by the University of Minnesota Press.[1]

Known as Papa Jo Jones in his later years, he is sometimes confused with another influential jazz drummer, Philly Joe Jones. The two died only a few days apart.

Jones died of pneumonia in New York City at the age of 73.[2]

This article uses material from the article Jo Jones from the free encyclopedia Wikipedia and it is licensed under the GNU Free Documentation License.

Autumn Vanessa Rubin
Update Required To play the media you will need to either update your browser to a recent version or update your Flash plugin.