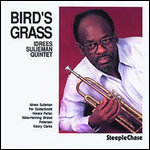 He was born Leonard Graham on 7 August 1923, later changing his name to Idrees Sulieman after converting to Islam.[2] He studied at the Boston Conservatory, and gained early experience playing with the Carolina Cotton Pickers and the wartime Earl Hines Orchestra (1943–1944).

On October 15, 1947, on what was Suliman’s second recording date (source: liner notes by Michael Cuscuna to The Complete Blue Note Recordings of Thelonious Monk) he played on Thelonious Monk’s first recording for Blue Note Records. Sulieman was closely associated with Mary Lou Williams and for a time and had stints with Cab Calloway, John Coltrane, Count Basie, and Lionel Hampton. Sulieman recorded with Coleman Hawkins (1957) and gigged with Randy Weston (1958–1959), in addition to appearing in many other situations.

He toured Europe in 1961 with Oscar Dennard, and stayed, settling in Stockholm at first, and then moved to Copenhagen in 1964. A soloist with the Kenny Clarke/Francy Boland Big Band from the mid-'60s through 1973, Sulieman frequently worked with radio orchestras. His recordings as a leader were for Swedish Columbia (1964) and SteepleChase (1976 and 1985). In 1985, he was among the performers on Miles Davis' album Aura, which was not released until 1989. Sulieman's career slowed down considerably in the 1990s.

He died of bladder cancer on July 23, 2002 at St. Anthony's Hospital in St. Petersburg, Florida.

This article uses material from the article Idrees Sulieman from the free encyclopedia Wikipedia and it is licensed under the GNU Free Documentation License.