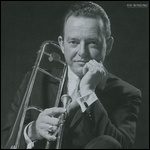 Winding was born May 18, 1922 in Aarhus, Denmark. His father, Ove Winding was a naturalized U.S. citizen, thus Kai, his mother and sisters, though born abroad were already U.S. citizens. In September 1934, his mother, Jenny Winding, moved Kai and his two sisters, Ann and Alice. Kai graduated in 1940 from Stuyvesant High School in New York City and that same year began his career as a professional trombonist with Shorty Allen's band. Subsequently, he played with Sonny Dunham and Alvino Rey until he entered the United States Coast Guard during World War II.

After the war, Winding was a member of Benny Goodman's orchestra, then Stan Kenton's. He participated in Birth of the Cool sessions in 1949, appearing on four of the twelve tracks, while J. J. Johnson appeared on the other eight, having participated on the other two sessions.

In 1954, at the urging of producer Ozzie Cadena, Winding began a long association with Johnson, recording trombone duets for Savoy Records, then Columbia. He experimented with instruments in brass ensembles. The album Jay & Kai + 6 (1956) featured a trombone octet and the trombonium. He composed and arranged many of the works he and Johnson recorded.

During the 1960s, Winding began an association with Verve Records and producer Creed Taylor. He released the first version of "Time Is On My Side" in 1963 before it was recorded by Irma Thomas and The Rolling Stones. His best selling recording from this period is "More," the theme from the movie Mondo Cane. Arranged and conducted by Claus Ogerman, "More" featured what is probably the first appearance of the French electronic music instrument the Ondioline on an American recording. Although Winding was credited with playing the ondioline, guitarist Vinnie Bell, who worked on the session, claimed that it was played by Jean-Jacques Perrey, a pioneer of electronic music. Winding experimented with ensembles again, recorded solo albums, and one album of country music with the Anita Kerr Singers. He followed Creed Taylor to A&M/CTI and made more albums with J. J. Johnson. He was a member of the all-star jazz group Giants of Jazz in 1971.

His son, Jai Winding, is a keyboardist who has worked as a session musician, writer and producer in Los Angeles.[2]

This article uses material from the article Kai Winding from the free encyclopedia Wikipedia and it is licensed under the GNU Free Documentation License.

Ev'ry Time We Say Goodbye Joe Haider Trio
Update Required To play the media you will need to either update your browser to a recent version or update your Flash plugin.