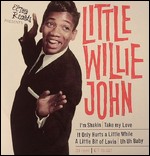 He was born in Cullendale, Arkansas, one of ten children; many sources erroneously give his middle name as Edgar.[3] His family moved to Detroit, Michigan when he was four, so that his father could pursue factory work. In the late 1940s, the eldest children, including Willie, formed a gospel singing group, and Willie also performed in talent shows, which brought him to the notice of Johnny Otis and, later, musician and producer Henry Glover. After seeing him sing with the Paul "Hucklebuck" Williams orchestra, Glover signed him to a recording contract with King Records in 1955. He was nicknamed "Little Willie" John for his short stature.[4]

His first recording, a version of Titus Turner's "All Around the World", was a hit, reaching # 5 on the Billboard R&B chart. He followed up with a string of R&B hits, including the original version of "Need Your Love So Bad", written by his elder brother Mertis John Jr. One of his biggest hits, "Fever" (1956) (Pop #24), was more famously covered by Peggy Lee in 1958. However, John's version alone sold over one million copies, and was awarded a gold disc.[5] Another song, "Talk to Me, Talk to Me" recorded in 1958, reached #5 in the R&B chart and #20 in the Pop chart, and also sold over one million.[6][7] A few years later it was a hit once again by Sunny & the Sunglows. He also recorded "I'm Shakin'" by Rudy Toombs,[8] "Suffering With The Blues", and "Sleep" (1960) (Pop #13).[6] In all, John made the Billboard Hot 100 a total of fourteen times. A cover version of "Need Your Love So Bad" by Fleetwood Mac was also a hit in Europe. Another of his songs to be covered was "Leave My Kitten Alone", (1959). The Beatles recorded a version in 1964, intended for their Beatles for Sale album, but it went unreleased until 1995.

Willie John was known for his short temper and propensity to abuse alcohol, and was dropped by his record company in 1963.[4] In 1966, he was convicted of manslaughter and sent to Washington State Penitentiary for a fatal knifing incident following a show in Seattle. He appealed against his conviction and was released while the case was reconsidered, during which time he recorded what was intended to be his comeback album, but owing to contractual wrangling and the decline of his appeal, it was not released until 2008 (as Nineteen Sixty Six).[9] Little Willie John died in 1968 at Washington State Penitentiary in Walla Walla, Washington. Despite counter claims (Rolling Stone had reported that the death occurred after John checked into the prison hospital with pneumonia[10]), the official cause of death was listed in his death certificate as a heart attack.[3]

His interment was in Warren, Michigan's Detroit Memorial Park East.

Little Willie John was posthumously inducted into the Rock and Roll Hall of Fame in 1996.

He was the brother of singer Mable John, who recorded for Motown and Stax, as well as being a member of Ray Charles' Raeletts. His son Keith John was a long time backing vocalist for Stevie Wonder.[8]

James Brown, who early in his career had opened shows for John, recorded a tribute album, Thinking about Little Willie John... and a Few Nice Things.

Robbie Robertson, former lead guitarist for The Band, referenced John in a song on his 1987 self-titled album titled "Somewhere Down the Crazy River." He was also referenced in Tom Russell's "Blue Wing."

This article uses material from the article Little Willie John from the free encyclopedia Wikipedia and it is licensed under the GNU Free Documentation License.

Chattanooga Choo Choo Dennis Armitage
Update Required To play the media you will need to either update your browser to a recent version or update your Flash plugin.