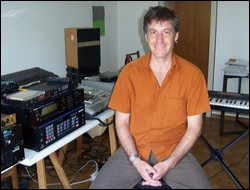 Niki Reiser (born 12 May 1958) is a Swiss film score composer and flautist. He is considered one of the most outstanding film composers of the German-speaking countries, winning the German Film Award five times. His debut was in 1986 the score for the film Du mich auch, directed by Dani Levy, for whom he has composed all further scores. He had his breakthrough with the music for the film Beyond Silence, directed by Caroline Link in 1996.

Niki Reiser was born in 1958 in Reinach, Aargau in Switzerland, the son of a pastor and a nurse.[1] Before he came to Basel age twelve, where he has lived since, he spent four years in Schaffhausen. In addition to classical flute lessons a child, he invented his own melodies on the piano. In his youth he played in several bands, composed pieces for them and for theater performances at school.

In the 1970s, Reiser studied classical music with an emphasis on flute in Basel. From 1980 to 1984 he studied in Boston at the Berklee College of Music jazz and classical music with a focus on film music.[1] From 1984 to 1986, Reiser lived partly in Europe, mostly in Switzerland, where he continued his studies in composition in Basel. In workshops in the U.S., he met Ennio Morricone and Jerry Goldsmith who influenced his music.[2] During this time he composed his first pieces for movies. During this period he also toured as a jazz flutist with the ensemble People, which he had co-founded.

In 1986, Reiser moved back to Europe where he met the film director Dani Levy. He composed the music for his first film Du mich auch.[1] The film was a surprising success throughout Europe and was nominated for the Golden Camera at the Cannes International Film Festival in 1987. This encounter started a lasting friendship, resulting in Reiser composing the music for all of Levy's films.

At that time Reiser joined the klezmer band Kolsimcha as a flutist, and composed several pieces for the group.[3] On two world tours he played with the band[4] in Carnegie Hall and at the Montreux Jazz Festival, among others.[5]

When Reiser realised that it was impossible to be a flutist and a composer at the same time, he concentrated on composition. In addition to working with Levy, he also composed for Caroline Link, whom he met in 1996. His breakthrough came with the music for her movie Beyond Silence. For her film Nowhere in Africa, Reiser studied African music in Nairobi. The influences of indigenous Kenyan music can be seen in the score he composed for the film.[6] In addition to cinema and TV films, he also wrote music for the theater. In 2008 he worked again for Link for A Year Ago in Winter.[5] The score won both the Preis der deutschen Filmkritik and the Deutscher Filmpreis of 2009.

Reiser has his studio in Basel's Gundeldingerfeld. He is on the board of the Deutsche Filmakademie since its inception in 2003.

As of 2012, Reiser was awarded the German film prize Deutscher Filmpreis five times. In 2005, he was the 12th recipient of the Rheingau Music Prize, as "a composer who repeatedly and majestically succeeds in meeting the particular dramaturgical needs entailed by film scores, and thus suffusing each individual work with its own unique sound".[2][3]

This article uses material from the article Niki Reiser from the free encyclopedia Wikipedia and it is licensed under the GNU Free Documentation License.

If You Could See Me Now Riccardo Garzoni
Update Required To play the media you will need to either update your browser to a recent version or update your Flash plugin.