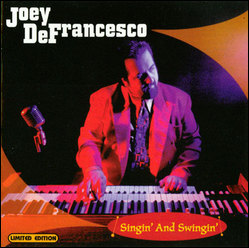 Joey DeFrancesco (born April 10, 1971) is an American jazz organist, trumpeter, and vocalist. Down Beat's Critics and Readers Poll selected him as the top jazz organist every year from 2003 to 2009.[1]

DeFrancesco was born in Springfield, Pennsylvania, to "Papa" John and Laurene DeFrancesco.[1] His grandfather was multi-instrumentalist Joe DeFrancesco, of Italian descent He grew up in Philadelphia, and started visiting jazz clubs his father was playing in from the age of seven. Joey DeFrancesco started playing the piano at the age of two when his father gave him a toy piano obtained from a cruise tour. After watching a television commercial showing a Fats Domino compilation, he decided to order it without telling his parents. His father appreciated the young DeFrancesco's interest in music, so he encouraged him to sit in on gigs.[1] By age ten, he was enrolled in the Settlement Music School Jazz Band. Under the direction of Lovett Hines, he learned and performed with the Jazz Band with the likes of saxophonist Robert Landham, drummer Kevin Outterbride, bassist Leonard Richardson Sr. and guitarist Kelvin McDaniel, playing out on his own, as well as sitting in with organ legends like Jack McDuff and Richard "Groove" Holmes.[2] DeFrancesco went to high school with bassist Christian McBride, where the two were often scolded for altering their big band charts.[3] While in High school, he was also in a local jazz trio called Strictly Business with drummer Leon Jordon Sr. and bassist Leonard Richardson Sr..

When DeFrancesco was seventeen years old, Miles Davis asked him to join his band. DeFrancesco toured Europe and recorded Amandla with Davis.[2] He became well known in the 1990s, however, through his work with John McLaughlin's trio Free Spirits. He has also played with jazz guitarists Pat Martino, Paul Bollenback, Jimmy Bruno, Dave Stryker, Danny Gatton as well as trumpet player Big Jim Henry and many others.

DeFrancesco's own recordings as leader, first with Columbia, and later with labels such as Muse and Big Mo, established what Chris Parker has referred to as "his importance as one of the most unfussily virtuosic torch-bearers of contemporary organ jazz."[4]

DeFrancesco listened to and learned from Jimmy Smith, to whom he pays homage in his 1999 High Note release, The Champ. In 2000 he recorded the album Incredible! with Smith. He also pays tribute to Don Patterson in Tribute to Don Patterson: The Philadelphia Connection released in 2004. DeFrancesco also learned from McDuff, and recorded with him as well. DeFrancesco paired with Jimmy Smith on Smith's last effort, called Legacy, finished just days before Smith died in 2005. In 2012 Joey was offered the slot in Carlos Santana's band, but declined.

Today, Joey DeFrancesco plays an average of 200 nights a year on the road with various musicians. His core bands include Byron Landham (drums), Paul Bollenback (guitar) or Pat Bianchi (keyboards). When not on the road, he resides in Arizona with his mother, father and daughter Ashley Blue Defrancesco.

This article uses material from the article Joey DeFrancesco from the free encyclopedia Wikipedia and it is licensed under the GNU Free Documentation License.

Fly Me To The Moon Birgit Ellmerer & Sophisticated Lady
Update Required To play the media you will need to either update your browser to a recent version or update your Flash plugin.