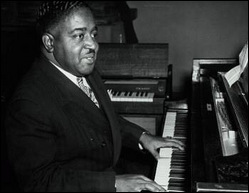 Journalist Tony Russell stated in his book The Blues - From Robert Johnson to Robert Cray, that "Johnson shared with the other members of the 'Boogie Woogie Trio' the technical virtuosity and melodic fertility that can make this the most exciting of all piano music styles, but he was more comfortable than Meade Lux Lewis in a band setting; and as an accompanist, unlike Lewis or Albert Ammons, he could sparkle but not outshine his singing partner".[2] Fellow journalist, Scott Yanow (Allmusic) added "Johnson was one of the three great boogie-woogie pianists (along with Lewis and Ammons) whose sudden prominence in the late 1930s helped make the style very popular".[1]

He began his musical career in 1922 as a drummer in Kansas City.[2] From 1926 to 1938 he worked as a pianist, often working with Big Joe Turner.[1] An encounter with Record producer John Hammond in 1936 led to an engagement at the Famous Door in New York City. In 1938 Johnson and Turner appeared in the From Spirituals to Swing concert at Carnegie Hall. After this show the popularity of the boogie-woogie style was on the upswing. Johnson worked locally and toured and recorded with Turner, Meade Lux Lewis, and Albert Ammons during this period.[1] Lewis, Ammons, and Johnson appeared in the film short Boogie-Woogie Dream in 1941.[2]

The song "Roll 'Em Pete" (composed by Johnson and Turner),[3] featuring Turner on vocals and Johnson on piano, was one of the first rock and roll records. Another self-referential title was their "Johnson and Turner Blues". In 1949, he also wrote and recorded "Rocket 88 Boogie", a two-sided instrumental, which influenced the 1951 Ike Turner hit, "Rocket 88".

In the late 1940s, Johnson recorded an early concept album, House Rent Party, in which he starts out playing alone, supposedly in a new empty house, and is joined there by J. C. Higgenbotham, J. C. Heard, and other Kansas City players. Each has a solo single backed by Johnson, and then the whole group plays a jam session together. On this album Johnson shows his considerable command of stride piano and his ability to work with a group.

At a nightclub in Niagara Falls, the piano was on a platform above the bar, and Johnson had to climb a ladder to get there.[2]

In 1950 he moved to Buffalo.[4] He encountered some health and financial problems in this period, including losing part of a finger in an accident and being partially paralyzed by a stroke. But he continued to record, and toured Europe in 1958 with the Jazz at the Philharmonic ensemble.[1][2] His final live appearance was the "Spirituals to Swing" in January 1967.[5] He died in Meyer Hospital, Buffalo, New York in March 1967, at the age of 62.[6]

This article uses material from the article Pete Johnson from the free encyclopedia Wikipedia and it is licensed under the GNU Free Documentation License.