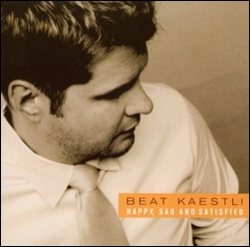 Beat (pronounced bay-at) Kaestli is a Swiss vocalist, songwriter, arranger and producer residing in New York City. Upon receiving a scholarship to the prestigious Manhattan School of Music in 1993, he decided to move from his native home of Switzerland to New York and make it his permanent home. Following several years of supporting himself as a session singer, backing such dance artists as Barbara Tucker and Inaya Day and working alongside Linda Hopkins on the world tour of the Harlem Gospel Show, Kaestli made his recording debut in 2002 with Reasons a collection of R&B-infused, pop-jazz originals that earned him a review in Billboard Magazine and comparisons to such disparate headliners as George Michael and Maxwell.[1]

While honing his craft alongside young Jazz note worthys like Jane Monheit, Stefon Harris and Jason Moran, Beat immersed himself in Manhattans fiercely competitive music scene, emerging as a seasoned performer. He now appears at renowned clubs such as Birdland, The Jazz Standard, B.B. King's, 55 Bar and The Blue Note and in 2005, Beat was the chosen vocalist for the Glenn Miller Orchestra.[2] In 2006, Beat's second album, Happy, Sad, and Satisfied was released. Happy, Sad, and Satisfied garnered very positive reviews, even being named one of the top 25 CDs of 2006 by Indie-Music Magazine[3] Kaestli returned to the classroom in 2007 when the Ella Fitzgerald Foundation scholarship from the Society of Singers provided him the opportunity to earn a Masters degree from the Aaron Copland School of Music. On 2009's multilingual Far from Home, Kaestli paid tribute to a spectrum of European songwriters, such as Michel Legrand and Kurt Weill and included original collaborations with contemporary European composers, like Misha Piatigorsky and Tino Derado. Far from Home also garnered many positive reviews, prompting Jon Hendricks to praise Kaestli as soulful [and] sensitive.[4]

In 2010, Beat Kaestli moved to the major jazz label Chesky Records to release his latest album, Invitation. The album is his return to the American songbook. Supported by bassist Jay Leonhart, drummer Billy Drummond, saxophonist Joel Frahm, trumpeter Kenny Rampton and guitarist Paul Meyers, Invitation is Kaestli's best received album so far.[5] It made it onto the Roots Music Chart, debuting at no. 15, and it's keeping a strong position in the Top 50 Jazz Albums category.[6] Invitation was recorded at historic St. Peter's Church in Chelsea, New York City. Instead of close miking all the instruments, Chesky Records used one microphone to hear the full, 360-degree acoustic space of St. Peter's Church. This recording has allowed much praise for the sound quality, being called "outstanding" and "significantly enhancing the albums stark beauty" by JazzTimes.[7]

This article uses material from the article Beat Kaestli from the free encyclopedia Wikipedia and it is licensed under the GNU Free Documentation License.

Benny Fonxionaires feat. Miss Brandy Butler
Update Required To play the media you will need to either update your browser to a recent version or update your Flash plugin.