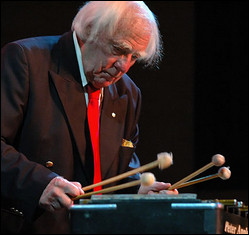 Peter Appleyard, OC (26 August 1928 – 17 July 2013[1]) was a British–Canadian jazz vibraphonist, percussionist, and composer. He spent most of his life living and performing in the city of Toronto where for many years he was a popular performer in the city's nightclubs and hotels. He also played and recorded with many of the city's orchestras and been featured on Canadian television and radio programs. In the early 1970s he drew wide acclaim for his performances with Benny Goodman's jazz sextet with which he toured internationally. In 1992, he was made an Officer of the Order of Canada in recognition of his being an "internationally renowned vibraphonist [who] has represented the Canadian jazz community across North America, Europe, the Middle East and Australia".[2]

Early life and career in England

Born in Cleethorpes, Lincolnshire,[3] Appleyard became apprenticed to a nautical instrument maker after being forced to leave school owing to economic reasons related to the Second World War. At that time the popularity of the American Big Bands was growing in England, particularly through a major influx in big band recordings from America by jazz musicians like Benny Goodman, Duke Ellington, and Count Basie. These recordings had a strong influence on Appleyard and he decided to pursue a career as a jazz musician. He began his career in the early 1940s playing in the Boys Brigade, a youth organization. He performed as a drummer in several other British dance bands during the 1940s and, while a member of the Royal Air Force during in the mid-1940s, played in RAF bands.[4]

In 1949 Appleyard moved to Bermuda where he lived for two years. While there he spent his holidays in Canada and picked up his first set of vibes. He was so impressed with Canada that, when the time came to leave Bermuda the choice of a new home was easy - he headed for Toronto. At first, unable to get a union card in Toronto, Appleyard worked as a room booking clerk at the King Edward Hotel and as a salesman at Simpson's department store. He began studying music with Gordon Delamont and soon thereafter began playing the vibraphone in concerts with Billy O'Connor in the early 1950s. From 1954 to 1956 he played with a band at the Park Plaza Hotel and made numerous appearances on CBC Radio with jazz pianist Calvin Jackson. He formed his own jazz ensemble in 1957 which performed not only in Toronto but also toured throughout North America and appeared on American television during the 1960s. Among the ensemble's original members was pianist and arranger Jimmy Dale. The group notably accompanied singer Gloria DeHaven for a year.[4]

From 1961 to 1962 Appleyard co-hosted, with singer Patti Lewis, the CBC Radio program Patti and Peter. He spent most of the mid-1960s on the road touring. In the late sixties, he ceased his busy touring schedule and returned to Toronto on a more permanent basis. He began playing once more at the Park Plaza Hotel. In 1969 he co-hosted the program Mallets and Brass with Guido Basso for CBC TV.[4] In addition he began studying timpani and percussion and extended his musical expertise substantially.

In the early 1970s Appleyard gained wide international notice as a member of Benny Goodman's jazz sextet. With the group he toured in Europe in 1972 and 1974 and in Australia in 1973. Afterwords, he played only periodically with the group for the remainder of the decade, notably playing three performances with the ensemble at Carnegie Hall in the mid to late 1970s.[4] During these years he continued to live in Toronto where he remained a popular performer in nightclubs and hotel lounges, serving as music director for a number of local jazz bands. He was also a leading percussionist in the city's orchestras for both theatre and studio work. Throughout the 1970s, he was a frequent guest to the Colorado Springs Invitation Jazz Party where he performed with numerous international famous jazz musicians. From 1977 to 1980 he had his own television program, Peter Appleyard Presents, a jazz and variety show syndicated in North America.[4]

In 1976, Frank Sinatra requested Appleyard to join him in concert with the Count Basie Orchestra and Ella Fitzgerald at the Uris Theatre in New York City. Sinatra made this request based on Appleyard's work with Goodman. Appleyard and Sinatra performed together several years later during a benefit concert in Ottawa that was arranged by Rich Little.[5]

In 1982 Appleyard formed the All Star Swing Band which specializes in performing old pop and jazz tunes, often in medley arrangements by Rick Wilkins. The ensemble's 1982 release Swing Fever earned a gold record certification for sales of 50,000 units within Canada and was nominated for a Juno Award for Instrumental Artist of the Year. The ensemble toured throughout the world, including several appearances in New York City (notably appearing with Mel Tormé at Michael's Pub), a 1987 tour to Great Britain, a 1998 tour to Switzerland, and at festivals like the Du Maurier Jazz Festival, Moncton Jazz Festival, the Ottawa Jazz Festival, and Dick Gibson's Jazz Party in Colorado. The group has also performed in Chicago, Florida, Texas, Scandinavia, Germany, and Japan.[4][6]

Following the death of Benny Goodman, Appleyard formed the Benny Goodman Tribute Band in 1985 which is composed of a number of Goodman alumni and some great Toronto musicians. Appleyard was also leader of the "Swing Fever Band". He made several concert tours for NATO, most of which were at his own expense. He completed four tours at bases in Europe and three tours in Cyprus and the Gaza Strip and also performed for Canadian and American servicemen at the North Pole Christmas Show in Greenland.

Peter Appleyard performed as a special guest at Carnegie Hall on numerous occasions through the late 90's and onwards under the direction of Skitch Henderson and the New Yorks Pops orchestra. He regularly toured overseas from London to Switzerland to Japan where he was asked by the Japanese Government to do a one-night performance at the Sapporo jazz festival. Appleyard said it was such a fantastic experience as the treatment and reception was first-class. He received the Queen's Diamond Jubilee award on 18 June 2012. He spent his final years living on a farm at Rockwood, Ontario.[7]

On other artists' releases

Appleyard performed on the following releases:

This article uses material from the article Peter Appleyard from the free encyclopedia Wikipedia and it is licensed under the GNU Free Documentation License.

Sad Lover Blues Catherine Russell
Update Required To play the media you will need to either update your browser to a recent version or update your Flash plugin.