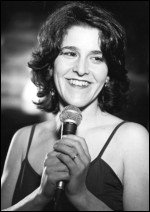 Sara Lazarus (born April 1, 1962) is an American jazz singer who lives in France.

Lazarus was born in Wilmington, Delaware and began piano lessons when she was eight. She was a member of the band in school, playing tenor saxophone with the American Youth Orchestra at 16 and touring Europe. She attended Harvard University, studied English Literature, and performed with locals bands on vocals and saxophone. After graduation she moved to France, where she met up with Illinois Jacquet, whom she had met at Harvard. She toured with Jacquet's band as a vocalist and performed with Patrice Caratini, Jacky Terrasson, and Franck Amsallem.[1]

She moved back to France, where she lived with her husband, saxophonist Eric Breton. Her debut album was released in 2005 and featured Gypsy jazz guitarist Biréli Lagrène. His Gypsy Project band joined her on her second album two years later.[2]

This article uses material from the article Sara Lazarus from the free encyclopedia Wikipedia and it is licensed under the GNU Free Documentation License.

The Wind Cries Mary Moncef Genoud Trio
Update Required To play the media you will need to either update your browser to a recent version or update your Flash plugin.