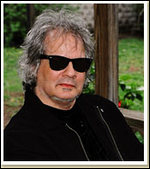 Al Kooper (born Alan Peter Kuperschmidt, February 5, 1944) is an American songwriter, record producer and musician, known for organizing Blood, Sweat & Tears (although he did not stay with the group long enough to share its popularity),[1] providing studio support for Bob Dylan when he went electric in 1965, and bringing together guitarists Mike Bloomfield and Stephen Stills to record the Super Session album. He has had a successful solo career since then, written music for film soundtracks, and has lectured in musical composition. He continues to perform live.

Kooper, born in Brooklyn,[2] grew up in a Jewish family[3] in Hollis Hills, Queens, New York. His first professional work was as a 14-year-old guitarist in the Royal Teens, best known for their 1958 ABC Records novelty 12-bar blues riff, "Short Shorts" (although Kooper did not play on the recording[4]). In 1960, he teamed up with songwriters Bob Brass and Irwin Levine to write and record demos for Sea-Lark Music Publishing. The trio's biggest hits were "This Diamond Ring", recorded by Gary Lewis and the Playboys, and "I Must Be Seeing Things", recorded by Gene Pitney (both 1965). When he was 21, Kooper moved to Greenwich Village.

He performed with Bob Dylan in concert in 1965, including playing Hammond organ with Dylan at the Newport Folk Festival, and in the recording studio in 1965 and 1966. Kooper also played the Hammond organ riffs on Dylan's "Like a Rolling Stone". It was in those recording sessions that Kooper met and befriended Mike Bloomfield, whose guitar playing he admired. He worked extensively with Bloomfield for several years. Kooper played organ once again with Dylan during his 1981 world tour.

Kooper joined the Blues Project as their keyboardist in 1965; he left the band shortly before their gig at the Monterey Pop Festival in 1967, although he did play a solo set at the famous festival, as evidenced by bootlegs of the event. He formed Blood, Sweat & Tears in 1967, leaving due to creative differences in 1968, after the release of the group's first album, Child Is Father to the Man.[5] He recorded Super Session with Bloomfield and Stills in 1968,[6] and in 1969 he collaborated with 15-year-old guitarist Shuggie Otis on the album Kooper Session. In 1975 he produced the debut album by the Tubes.

Kooper has played on hundreds of records, including ones by the Rolling Stones, B. B. King, the Who, the Jimi Hendrix Experience, Alice Cooper, and Cream. On occasion, he has even overdubbed his own efforts, as on The Live Adventures of Mike Bloomfield and Al Kooper and other albums, under the pseudonym "Roosevelt Gook".[7] After moving to Atlanta in 1972, he discovered the band Lynyrd Skynyrd, and produced and performed on their first three albums, including the singles "Sweet Home Alabama" and "Free Bird".

He wrote the score for the TV series Crime Story and for the film The Landlord and wrote music for several made-for-television movies. He was the musical force behind many of the pop tunes, including "You're the Lovin' End", for The Banana Splits, a children's television program.

During the late 1980s Kooper had his own dedicated keyboard studio room in the historic Sound Emporium recording studio in Nashville, next to studio B.

"I'm so pleased to be in Britain, I could just sit and pour tea over my head."

Kooper published a memoir, Backstage Passes: Rock 'n' Roll Life in the Sixties (1977), which was revised and published as Backstage Passes and Backstabbing Bastards: Memoirs of a Rock 'n' Roll Survivor (1998). The revised edition includes indictments of "manipulators" in the music industry, including his one-time business manager, Stan Polley. An updated edition, including supplementary material, was published by Backbeat Books in 2008.[9]

Kooper's status as a published author enabled him to join (and act as musical director of) the Rock Bottom Remainders, a band made up of writers, including Dave Barry, Stephen King, Amy Tan, and Matt Groening.

In May 2001, Kooper was awarded an Honorary Doctorate of Music from Berklee College of Music.[10] Kooper is retired from teaching songwriting and recording production at Berklee College of Music, in Boston, and plays weekend concerts with his bands the ReKooperators and the Funky Faculty. In 2008, he participated in the production of the album Psalngs,[11] the debut release of Canadian musician John Lefebvre.

Kooper was inducted into the Musicians Hall of Fame and Museum, in Nashville, in 2008.[12]

In 2005, Martin Scorsese produced a documentary titled No Direction Home: Bob Dylan for the PBS American Masters Series in which Kooper's contributions are recognized.

Al Kooper is most notable as the driving force behind the RIAA certified gold album, Super Session (with Stephen Stills and Mike Bloomfield) (1968) as well as Blood, Sweat & Tears (1968). He played the organ parts of Bob Dylan's "Like a Rolling Stone" and was in the band along with Bloomfield and Barry Goldberg at Dylan's notorious 'electric folk' gig at the Newport Folk Festival in 1965.

Kooper had been invited to the session as an observer and hoped to be allowed to sit in on guitar, his primary instrument. He uncased his guitar and began tuning it. After hearing Mike Bloomfield, who was the hired session guitarist, warming up, he concluded that Bloomfield was a much better guitarist, so Kooper put his guitar aside and retreated into the control room.

As the recording sessions progressed, keyboardist Paul Griffin was moved from the Hammond organ to piano. Kooper quickly suggested to producer Tom Wilson that he had a "great organ part" for the song (which he later confessed was just a ruse to play in the session), and Wilson responded, "Al, you're not an organ player, you're a guitar player", but Kooper stood his ground. Before Wilson could explicitly reject Kooper's suggestion, he was interrupted by a phone call in the control room. Kooper immediately went into the studio and sat down at the organ. When Wilson returned, he was shocked to find Kooper in the studio. By this time, Kooper had been playing along with Dylan and his backing band. His organ can be heard coming in an eighth note behind the other members of the band, as Kooper followed to make sure he was playing the proper chords. During a playback of tracks in the control room, when asked about the organ track, Dylan was emphatic: "Turn the organ up!"[13]

This article uses material from the article Al Kooper from the free encyclopedia Wikipedia and it is licensed under the GNU Free Documentation License.

Rice And Beans Michel Camilo
Update Required To play the media you will need to either update your browser to a recent version or update your Flash plugin.