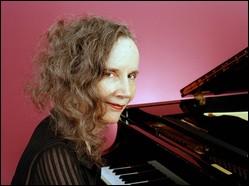 Joanne Grogan was born in Ventura, California and attended the Los Angeles Conservatory of Music. She was a fan of pop pianist Frankie Carle before she became enamored with the music of Charlie Parker. In the 1950s she performed with Dexter Gordon, Teddy Edwards, and Charles Brackeen. She and Brackeen married and moved to New York City in 1965. She performed with Chick Corea, McCoy Tyner, and Ornette Coleman.[1]

She played with Joe Henderson (1972–75) and Stan Getz (1975–77) before leading her own trio and quartet. Brackeen established herself as a cutting edge pianist and composer through her appearances around the world, and her solo performances also cemented her reputation as one of the most innovative and dynamic of pianists. Her trios featured such noted players as Clint Houston, Eddie Gómez, John Patitucci, Jack DeJohnette, Cecil McBee, and Billy Hart.

She served on the grant panel for the National Endowment for the Arts, toured the Middle East with the US State Department as sponsor, and had solo performances at Carnegie Hall.

She has recorded over twenty albums as a lead musician and is a professor at the Berklee College of Music[2] and at The New School.[3]

This article uses material from the article Joanne Brackeen from the free encyclopedia Wikipedia and it is licensed under the GNU Free Documentation License.